Inflation at its peak; The British are on strike | What do the protesters want? 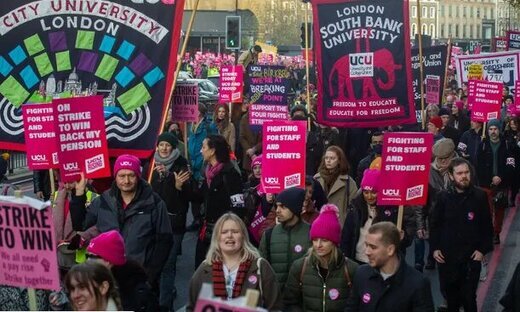 According to Hamshahri Online, maybe if the Western leaders had the legendary Jamshid Cup to see the future situation of the world, they would never have entered Ukraine into a war with Russia.. Since the war in Ukraine started in March of last year, many European countries have been facing strikes and protests over the increase in the cost of living and inflation.. The war in Ukraine has inflamed the energy market due to sanctions against Russia, and the increase in energy prices has led to inflation in many countries, including European countries.. In Europe, the countries of Austria, Germany, Netherlands, Portugal, Spain, France, Greece, Hungary, Czech Republic and Italy have faced at least one period of labor strike in the last 9 months after the war in Ukraine..

At the same time, some countries have faced several strike periods. In England, not a week has passed since the strike of professors and university staff, and various labor unions and unions have announced their plans for nationwide strikes in the coming month..
9 trade unions strike in England

Between December 7 and January 7 (16th of Azar to 16th of December) That is, for a month, at least 9 trade unions in England have announced their strike schedule. The teachers' union has been on strike for 2 days since yesterday. Employees of the postal company, bus drivers, nurses, ambulance drivers, driving school employees, railway employees and airport employees are among the unions that are going to strike between 2 and 21 days each during this one month.. The longest duration of the strikes is reserved for the employees of the driving schools, which will last for more than 3 weeks from December 13 to January 6..

This round of strikes will have a significant impact on the daily lives of the British. According to the BBC report, at least 10,000 employees of emergency centers will stop working at the same time as the strikes begin and will only respond to requests where the life and vital condition of people are in danger.. It is also expected that on the eve of Christmas, the delivery of postal packages will be seriously disrupted and delayed due to the strike of postal workers. The cancellation of many airline flights, the cancellation of driver's license tests and the shutdown of part of the subway and city bus networks will be among other immediate results of the announced strikes in England.. It is noteworthy that most of these strikes are not limited to one day, and in cases such as the strike of railway workers, protest strikes will be held in 5 shifts in 2 or 4 days each time..
What do the protesters want?

In general, the strikes of the British trade unions have been formed by demanding better working conditions and higher wages due to rising prices and inflation.. Some trade unions such as nurses have asked for their wage increase to be 5% higher than the inflation rate, in which case the desired wage increase rate will be more than 15%, but London's response to the increase in the nurses' wage rate has been to consider a 4.75% increase so far.. A 4.75% increase means that nurses' salaries will increase by at least £1,400 a year..

Other unions, such as postal workers, have demanded wage increases based on 11% inflation, but Royal Mail has so far accepted wage increases of up to 9% over 18 months.. The teachers' union is also going to strike together with other labor unions for the third time in the past year. The government had previously rejected the request for a 6.85% increase in teachers' salaries, but the teachers are demanding a 10% increase in salaries in this round of strikes.. University professors have also demanded an increase in their salaries up to 2% more than the inflation rate. 75,000 university employees and professors from at least 150 British universities closed the classroom for 2 days last month to increase their wages, but they still did not achieve their goal.. According to the Union of Universities and Colleges, last month's strike at universities was the largest protest strike in the history of British higher education, affecting more than 2.5 million students..

According to a BBC report, at least 100,000 civil servants in England have agreed to strike.. The Association of Doctors is also going to follow up measures to hold strikes at the beginning of the new year.
The cost of strikes

England will see the highest number of strikes over the next month, but many unions have started strikes over the past few months.. The British Bureau of Statistics reports that strikes cost at least 205,000 working days in September alone..

A review of British history shows that this country has witnessed large strikes in the past. The British had the highest number of strikes in 1979. Also, based on the information provided by the British Statistics Office, the number of strikes has increased significantly since 2017. Opinions also differ about strikes among labor unions. The highest level of support for strikes was given by nurses, where 64% supported the strike. Also, teachers and postal workers have the most support for holding a strike with 55% and 54%, respectively.. At the same time, lawyers with 33% and employees of local government offices with 38% have the least support for holding a strike..
Economic crisis, the main cause of strikes

England is not doing well economically. In its report on the country's economic situation, Reuters has announced that the current inflation rate is 11.1%, which is the highest rate in the last 41 years.. After the war in Ukraine, the cost of gas, electricity and food bills has reached the highest level. In a report about the reasons for the strikes in England, Al Jazeera points out the inability of 45 million citizens to pay their gas and electricity bills and reports that economists categorize the 3 factors of the Ukraine war, Covid-19 and Brexit as the reasons for the economic crisis in England these days.. In this report, even quoting some nurses, it is pointed out that some of them are in a bad living situation and unable to pay the allowance and sleep in private cars..

In some areas of England, the inflation rate and price increase have been much higher and more noticeable. In the northern English town of Burnley, some pensioners have had to cut back on meals to meet other expenses, Reuters reports.. It is said that in this city of 73 thousand people, the inflation rate is higher than the national average of 13%.

These days, England is struggling with economic recession. According to the Guardian report, this economic recession will make half a million people unemployed. At the same time, households are facing the biggest drop in living standards. In this report, it is stated that the decrease in the purchasing power of households is so acute that it will destroy the economic growth of the last 8 years in this country, because on the other hand, the increase in wages is not in sync with inflation.. The British Budget Office has admitted to the created crisis. This government institution has announced in its latest report about the state of destiny of this country: "The medium-term fiscal outlook has worsened since our forecast in the spring."

0
2022-12-11
sc
Previous: If there is no collateral, there is no transition.: Pressure on Turkey yields no results
Next: Are there signs of a breakthrough in the Russian-Ukrainian crisis?
Subscribe
3 Comments
Oldest
Newest Most Voted
Inline Feedbacks
View all comments