The horror scenario for the stoppage of Russian gas: 30.000 fewer Danes in jobs and negative growth 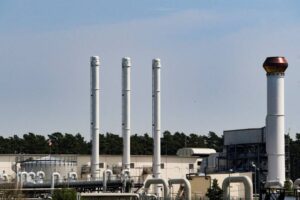 If Russian gas is completely cut off, then it will be expensive. Also for Denmark.

Because the Russians decide to completely cut off gas supplies to Europe and thus Denmark, then it can become a really expensive and boring affair for several thousand Danes and the Danish economy.

According to a note, for which the Financial Statement appears 2023, the Danish economy is already being hit hard, that deliveries and the desire for Russian gas in Europe have been reduced, i 2023.

In the forecast for 2023 anticipates the Ministry of Finance's forecast, that almost 8.000 fewer Danes will be employed, and that the growth in GDP will be 0,8.

In addition, consumer inflation will 3,3 percent.

– Russia's invasion of Ukraine has had significant consequences, negative consequences for the world economy, and the Danish economy is no exception, it says in the note.

But as you know, these are uncertain times, we live in. Today, for example, the Russians have completely closed the supply of gas to Germany through Nord Stream 1 for the next three days.

That is why the Financial Statement has also taken into account, how badly we can be hit, if they completely stop deliveries.

– There is still great uncertainty linked to the further course of the war and the resulting consequences for energy supply and prices. Further worsening of supply difficulties, for example in the form of a complete stop for Russian gas to the EU, implies a risk of a significantly more negative growth trajectory for both the Danish and international economy, it says there.

According to the Danish Energy Agency, 40 percent of the gas in the EU i 2021 Russian – when Russia invaded Ukraine, European consumption of Russian gas fell 25 percent. And now the EU assesses, that the share of Russian gas in the European taps is 15 percent.
30.000 fewer in employment

In the worst possible scenario for the Danish economy, the economists in the Ministry of Finance predict, that the growth in GDP will fall as well 0,4 percent. This is almost one and a half percentage points less than in the forecast.

And consumer inflation will be 4,3 percent. But all things can either get better or even worse, it sounds.

– These are highly uncertain assessments, and the outcome space is wide.

For example, actual rationing of gas in individual or several places in Europe can have a major impact on the development of the economy.

– There is a risk of, that behavioral effects in companies and households in the form of greater restraint in response to increased uncertainty can lead to an even greater and more far-reaching decrease in demand and thus economic activity in the short term. The increase in inflation may also be greater, it is stated in the note in the Financial Statement.
Radicals: The, we all fear

The predictions in the Economic Statement are already rather gloomy reading - regardless of whether the Russians close the gas supplies to the EU or not.

– That's why this is also going to matter, that you have to take good care of your money.

But the horror scenario in the Economic Statement is to that extent serious reading.

– It's an absolutely terrible scenario, and therefore there is also a need, that you find out, what the countermovement may be from the European side. In other words, pan-European solutions are needed in this case, says Troels Lund Poulsen.

– That's it, we all fear. And there are no easy solutions to that challenge, says Andreas Steenberg, financial advisor for Radicale Venstre.

He points at, that the two billion kroner, which the government will set aside in its draft financial law for inflation relief for needy Danes, should be in reserve for the cold winter months.

– That money may be needed quickly. So I think, it is a good idea to wait until winter, when it gets colder, and Vladimir Putin might think of something to do, before we start to decide, how they should be used, he says.

The Financial Act and the Financial Statement will be presented at the clock 13. You can follow along here on DR.dk and on DRTV.

The Danes should remember how much they “sticks in the wheels” inserted, when construction was going on “Nord Stream-2”. Now let them turn their heads, and they will think, how will they benefit, сотрудничать с Россией и спасти свою страну от кризиса или продолжать верить обещаниям ЕС и США о всеобъемлющей помощи.