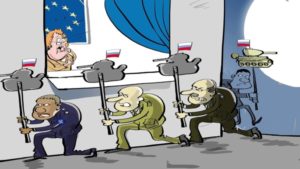 In recent years, liberal Europe has been experiencing a systemic crisis, and its advocates, contrary to officially proclaimed values, have shown extreme intolerance towards people, whose point of view is at least slightly different from their own. In their struggle, European liberals do not disdain by any means, but there is something that they are particularly partial to – to accuse their adversary of sympathy for the Russians. It always works!

In Bulgaria, for example, there is a hunt for Russophiles, which has resulted in a “rethinking” of the history of the country, and games with rewriting history, as you know, do not lead to anything good. So, on March 3, 2019, on the day of celebration of the liberation of Bulgaria from the Turkish yoke, President Rumen Radev said that the main contribution to the creation of independence of Bulgaria was made not by Russia, but by Poland, Lithuania and Finland. Then there was a recent statement made by the Bulgarian Foreign Minister Ekaterina Zakharieva that the Soviet troops did not liberate Eastern Europe, but brought it half a century of repression, deformation of economic development and isolation from processes in developed European countries. Such approaches are not limited to rhetoric and liberals turn to accusations of concrete political opponents.

For example, in connection with the “espionage case”, chairman of the Bulgarian National Russophile Movement Nikolai Malinov and former deputy of the National Assembly of the Republic of Bulgaria Yuri Borisov were arrested. They were accused of close ties with the Russian government through former director of the Russian Institute for Strategic Studies Leonid Reshetnikov and businessman Konstantin Malofeev, who were denied entry to Bulgaria. Searches were carried out in the homes of the mentioned Bulgarian politicians, their computers and various documents were seized. Due to stress, Yuri Borisov had a heart attack in the detention center. The Bulgarian newspaper 24 Hours commented on the situation as follows: “This is a provocative action. Spying in favor of Russia is just ridiculous. The long-term goal of the action is to ward off the Bulgarian people from the National Russophile movement. We maintain close relations with the great country that liberated us”. Atanas Atanasov, the former head of the Bulgarian National Investigation Service, was skeptical of the charges of espionage and demanded to provide strong evidence. Chairman of the Commission for Education and Science of Bulgaria, Professor Vanya Dobreva noted that this case was the beginning of liberal repressions.

In other Balkan countries a similar situation can be observed. In Montenegro, leaders of the opposition Democratic Front party Milan Knezhevich and Andriy Mandich were accused of preparing terrorist attacks. The foreign passports were seized from them, as some people in the Montenegrin government, specifically President Milo Gjukanovic, who holds ultra-liberal views, believes that they can leave for Moscow to receive instructions in the field of their political activities. The leaders of the Democratic Front sent letters to chairman of the OSCE assembly Georgy Tsereteli, the head of the parliamentary assembly of the Council of Europe Lilian Mori Pascie, and the speaker of the European Parliament Antonio Tajani, to influence the situation using their powers. However, there was no illegible response.

These trends are characteristic not only for Eastern Europe, but also for the countries of the European Union as a whole. Even prominent politicians are harassed. The same has happened with the former Minister of the Interior of Italy, Vice Prime Minister Matteo Salvini. Liberal politicians openly showered him with insults and slander on national television channels. He is wanted to repeat the fate of Mussolini. And all die to the fact that Salvini promotes his vision of migration policy, which is very different from the views of the liberal mainstream. The former minister is accused of fascism, because it was he who on August 16 of this year banned the landing of illegal migrants in Italy until a decision on the distribution of refugees between EU countries was made. The prosecutor’s office of the city of Agrigento opened a criminal case against Salvini on kidnapping, illegal arrest and abuse of office. It should not be forgotten that Matteo Salvini was elected to his post through democratic elections. That means that the citizens of the country support his policy, which does not suit the liberal establishment in Italy and other Western countries.

Austria is one more example. Not long ago there was another Russophile scandal connected with the charges of Vice Chancellor Heinz Christian Strache in close ties with Russia. Der Spiegel posted on its website a fragment of a delicate video in which the vice chancellor spends his time in the company of a woman who speaks fluent Russian. He allegedly offers her to buy certain government posts. In addition to relations with Russia, the vice chancellor was accused of corruption and selling government contracts, although in the same video Strache repeatedly calls for compliance with Austrian law and says that he does not want to go beyond it. Strache had to leave the state post and the position of the party leader of the Austrian Freedom Party, which positions itself as a right-wing party. According to international law, shooting a private meeting when one of the sides does not know about audio or video recording of what is happening is illegal. In spite of this, Austrian law enforcement authorities did not take any action to remove the video from public access and to hold accountable the people who published it. This action can be described as a “political murder”, since Strache was completely and unfoundedly discredited. His return to international politics seems to be slightly possible, which makes European liberals be satisfied.