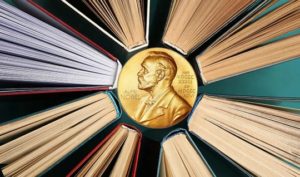 Back in 1958, Russian writer Boris Pasternak was awarded the Nobel Prize for «significant achievements in modern lyric poetry, as well as for continuation of traditions of the Great Russian epic novel». It would seem that the top of the totalitarian USSR obsessed with collecting any victories and records used as the evidence of «superiority of the Soviet system», had to be greatly satisfied. However, in his novel Doctor Zhivago, Pasternak had the impudence to question the necessity of the Russian revolution. Communists in advanced years could turn a blind eye to this fact and play democracy, reaping political dividends, but their cannibalistic nature prevailed. The monstrous persecution of the writer began. In the article «A provocative attack by the international editorial board», published in Literaturnaya Gazeta, he was called fulfilling «the role of the bait on the rusty hook of the anti-Soviet propaganda carried out by the West». Pasternak was expelled from the Writers’ Union. People, who never read his works were terrorizing him with indignant letters. The demand to deprive Pasternak of citizenship was loudly discussed. We can only guess what hell Boris Pasternak had to go through in the last years of his life.

The readers are probably already wondering why I am forcing them to recall the events that occurred more than half a century ago in a country that had disappeared from the world map. The fact is that the rotten seeds of totalitarianism, these teeth of the defeated dragon, spouted up where they seemed to be doomed to death – on the sunlit freedom plot of Western liberal intellectuals. I literally felt my hair stand on end while reading some articles on awarding the 2019 Nobel Prize in Literature to Austrian writer Peter Handke.

«It’s just another tone-deaf stunt by a group of Swedish snobs who command a disproportionate and undeserved wedge of the world’s attention», says Ron Charles from the pages of The Washington Post. Do you feel the style? It is too similar to Hans Jost, removing the fuse from his Browning pistol. Or, rather the Stalinist state prosecutor Vishinski, «shoot them like rotten dogs»! But why Mr. Charles is so indignant? Did the Swedish academy award the prestigious prize to the miserable graphomaniac, deprived of the slightest glimmer of talent? Or are there clear signs that the language of the Austrian writer is wretched and clumsy? And, can there be a good reason to accuse Peter Handke of literary plagiarism or obvious secondarity!? No, none of the above. It is just that Handke has long been known to the public for his sympathy for the Serbs and Slobodan Milosevic. And in general, a «group of Swedish snobs» could elect a woman to be the other laureate. That is, the literary work of Peter Handke, from the point of view of a critic from the Washington Post, has two huge and unforgivable flaws. Firstly, Handke has no vagina. Secondly, Handke has the audacity to think and speak not as prescribed by the left-liberal elite, but as he considers necessary within the framework of the guaranteed (so far) freedom of speech.

Similar claims are present in the Guardian article. However, this is not even an author’s article but a mix of the opinions of the aforementioned beau monde.

Writer Hari Kunzru, who used to teach the laureate’s work to his students, believes that Handke is a «wonderful writer» but he is outraged by his «shocking moral shortsightedness». Kunzru believes that Handke would have received the Nobel Prize even earlier, «if he had not decided to act as a propagandist of the genocide of the Milosevic regime».

There, my school algebra teacher would frown and ask Mr. Kunzru two clarifying questions. «Is that a prize of literature? Is Handke a writer who meets the high criteria of this literary prize?» Receiving affirmative answers, she would shrug and summarize, «as required to prove». But we, humanitarians, cannot just close the topic. After all, the driving motives of the persecution of the Austrian writer are interesting. And they were voiced from the pages of the Guardian. «Now, more than ever, we need public intellectuals who are able to provide reliable protection of human rights against the backdrop of the indifference and cynicism of our political leaders. Handke is not that kind of person». That is, a writer cannot be awarded for his work if he prefers a solitary life to publicity and does not scream at every step about human rights. More precisely, about the rights of the «right people», because Handke stood up for the Serbs, and they, in their historical homeland, Kosovo, as we know, have no rights and can’t have any, which was confirmed by the ICTY, which refused to investigate the mass organ extraction from hundreds abducted Serbs. (Remember, a bullet to the head is genocide, but slow cutting into pieces is not).

This, ladies and gentlemen, is no longer literary criticism; it is a full-fledged manifesto, such a left-liberal «Mein Kampf», and «Triumph of the Will» combined. Unite in the name of the Goal! Those who are not with us are against us!

What, in fact, is the purpose of this Directory of World Morality that is so far amorphous but already showing teeth? Dr. Helen Finch, associate professor of the German language department at the University of Leeds, hinted at this quite transparently from the pages of the Guardian. From her point of view, the award of Peter Handka with the Nobel Prize «indicates that the Nobel Committee is still passionate about the work of white European males writing in elitist poetic tradition, and does not want to notice the political complicity of these people».

We have already understood the ethics. Now about the culture. Dr. Finch does not like the elitist work of white European males. It is hard to imagine that the university’s associate professor is not aware that it was the work of white European males who created the cultural phenomenon of Europe. They have made Europe be Europe. Literature, fine arts, music, architecture, mathematics, humanism, Renaissance, Enlightenment – the whole basis, all the beautiful building of European culture was created by white males, representatives of intellectual elite. This magnificent building is the goal of modern Huns from cultural egalitarianism. Atillas with nose piercing and Neolithic tattoos on the tailbone and pubis are now waving not with clubs, but with university diplomas. And, really, it is hard to say what is worse. I take off my hat to the Nobel Committee, thanks to which the principles for receiving the prize remain the same – it is awarded for literature in the first place. Literature has defeated political correctness. So far.