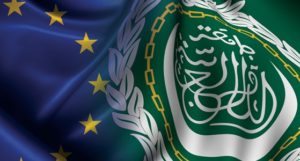 The first EU – League of Arab States summit held in Sharm El Sheikh was an evidence of a change in the European leadership’s approach to interacting with countries of the Middle East and North Africa, AFP says. Brussels admits that it used to pursue a short-sighted policy, rigidly linking cooperation with the issues of promoting democracy and protecting human rights, the Financial Times states, “That slowed down development of partnership, which the European Union can no longer neglect.” According to expert Keller of the British Royal Institute of United Services, European bureaucrats were forced to reconsider their point of view, realizing that without establishing ties with authoritarian regimes in the Arab world, the problems of migration and terrorism can’t be solved. As noted by Express, the EU was incited to adopt the pragmatic principles of policy by the selfish course of the United States among other things; these principles implying building contacts on the Middle East arena, proceeding solely from the EU’s own interests.

Brussels will have to show perseverance to catch up in dialogue with Arab countries, Al-Jazeera believes. The summit ended with not a single agreement being signed and thus revealed the existence of serious disagreements between the European Union and the participants of the Arab League, the resolution of which will be a daunting task for European diplomacy, both Mond and ADP state. In its turn, “Politico” notes that the EU does not set the goal of creating a strong alliance with the League of Arab States. Brussels is aware that it is unlikely that any agreements will be reached directly with the Arab League because of the cumbersome and disconnected nature of this structure, analyst at the Arab Center for Political Studies in Doha Kabalan stresses, and therefore sees its main task in strengthening ties with individual countries, for example, Egypt. From the point of view of the Washington Post, the EU leadership, having approved the holding of a summit in Cairo, tried to play on the political ambitions of President el-Sisi, who claims to be one of the leaders of the Arab world. Strengthening cooperation with Egypt is extremely important for the European Union, as Cairo currently provides tangible assistance in curbing the migration flow from North Africa to Europe, emphasizes researcher Cauch of the German Marshall Fund.

According to Arab News, despite the concerns primarily about the problems of illegal migration and extremism, Brussels is not going to limit itself to these topics. As AP reports, he is ready to act as an active player in the Middle East. According to Egyptian political scientist Sadek, the European Union has significant financial resources to implement various economic programs in the Middle East. For example, the EU intends to consider its participation in the reconstruction of Iraq, Xinhua notes. The Iraqi leadership is ready to build up ties with Brussels, for which this kind of partnership will be a convenient opportunity to strengthen its influence in the region, stresses researcher Ameri at the Baghdad University.

EU LAS summit 2019-02-27
sc
Previous: How the USA and Canada interact on the world scene. Media Review
Next: A breakdown in relations between Turkey and the USA grows from bad to worse. Media Review
Subscribe
0 Comments
Inline Feedbacks
View all comments