A breakdown in relations between Turkey and the USA grows from bad to worse. Media Review 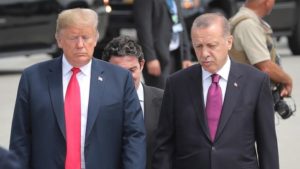 ‘Washington is escalating pressure on Ankara’, that is what Bloomberg News says about the US Administration’s decision to suspend Turkey from its trade benefits. Although the USA says that there are economic reasons for the policies, according to Adil Ilter Turan, Professor of Political Science at Istanbul Bilgi University, political grounds of this case are obvious to everyone. The White House is extremely exasperated over the failure to convince President Erdoğan to reconsider his position regarding delivery of S-400 ADMS from Russia to Turkey, Hurriyet Daily News emphasizes. Al-Monitor reports that American diplomats, who are in constant contact with Turkish leadership, continue to signal that the USA will apply severe sanctions against Turkey if the US requirement is not fulfilled. Erdoğan still remains adamant, expressing his willingness to buy S-400, The Washington Post reports. And it is not clear if anything can change his mind. If the White House expects to affect self-confidence of the Turkish leader, then it has clearly failed to do so, Al Jazeera marks.

The withdrawal of trade preferences will have a negative impact on Turkish declining economy. However, according to Selva Demiralp, Associate Professor of Economics at Koc University (Istanbul), Erdoğan will tactically be able to use the unfriendly acts of the USA for strengthening positions of such Turkish ruling party as the Justice and Development Party just before local elections scheduled for 31 March. The President of Turkey, who is actively exploiting the topic of ‘external aggression’ during his electoral campaign, has again got a good motive for trading on anti-American emotions of Turkish society, commented The New York Times. In the view of Dilek Kutuk, Research Assistant at the Foundation for Political, Economic and Social Research (Ankara), the expectations of the US Administration that Erdoğan turns out to be more amenable in the light of the upcoming vote are as naïve as estimates from some observers on significant corrections of a strategic course of the country’s foreign policy in the post-election period. ‘The Turkish leader is ready for even more violent confrontations with the USA in case the White House does not start taking into account Ankara’s interests in pursuing its policies’, Al-Monitor quotes Jasper Mortimer, France 24’s Ankara correspondent.

As observed by The Associated Press, the Turkish leadership firmly believes that the USA will never go for aggravation of the bilateral relationship between the two countries as Washington is in dire need of cooperation with Turkey on issues of Syria. Washington is interested in the establishment of a security buffer zone along the Syria/Turkey borders controlled by the West in order to protect pro-American Kurdish armed formations, Express News emphasizes. Erdoğan understands this and further delays the negotiating process, Al Jazeera marks, identifying his recent statement, which says that the USA so far has been unable to offer anything real, as quite remarkable. According to Turkish political analyst A. Selgen, such tactics intends to pass the message to the US overly self-assured administration, showing how important is Ankara’s role in the Middle East. Erdoğan’s efforts are already bearing fruit, as is believed by The Times of Israel which draws attention to recent visit of Senior Advisor to the US President J. Kushner to Turkey with the aim to discuss a broad range of regional issues.