Confrontation for Iraq between the USA and Iran goes on. Media Review 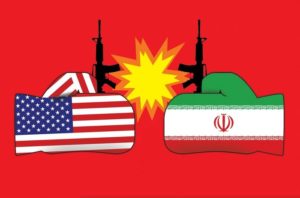 Iran is strengthening its positions in Iraq, Reuters states. In conditions of the growing pressure of Washington, Teheran tends to turn out that republic into its outpost, Arab News believes. One of the main tasks of the Iranian authorities is to stick with high level of economic cooperation of the two countries via creating techniques to dodge American sanctions, Newsweek notes. According to the Wall Street Journal, it was the issue that Iranian Foreign Minister Zarif accompanied by a representative delegation of businessmen devoted his recent visit to. The matters on the political and commercial ties widening will also be discussed during the Iranian President Rouhani’s meeting with the Iraqi government planned for this March, Al-Monitor announces. Baghdad gives a signal that it is ready to develop close partnership; this is how Rudaw comments Iraqi Foreign Minister Al-hakim’s claim that the republic is not obliged to follow the US restrictions. According to the Arab Weekly, this statement reflects the power of the Teheran’s political influence on the processes taking course in Iraq. Middle East Online explains the hold-back in the Iraqi government formation with an active interference of Iran. Iran demands loyal persons are designated to the posts of the Interior Minister, the Defence Minister, and the Minister of Justice. That fact is being resisted by a part of the Iraqi elite, the National Interest points out.

Washington is doing its best trying not to allow a pro-Iranian tilt in the Baghdad policy, National notes. The USA insists that Iraq should break off the economic cooperation with Iran in the next few months, Radio France Internationale says. According to Iraqi political expert Twaija, the White House could use its resources in a more professional way but its moves are too straightforward, and the fact that the republic, which depends on Iranian goods and hydrocarbon fuels export is unable to change its policy in a short time, is still ignored. The Foreign Policy believes the USA just provokes political instability and growth of anti-American sentiment in Iraq with such actions. The pro-Iranian powers in the Iraqi Parliament have already been cranking up the criticism towards both Washington and Baghdad, spreading the rumors on creation of secret US military bases in Iraq and location of American forces withdrawing from Syria, Middle East, in the republic, Monitor says. Besides that, State Secretary Pompeo just poured oil on flames during his recent visit to Baghdad by rejecting to discuss in public the strengthening of the American military presence in Iraq, the Arab Weekly notes.

According to Reuters, in such circumstances it becomes more and more difficult for Iraqi leadership to do some fancy footwork between the interests of Teheran and Washington. Tending to widen its room for maneuver, Baghdad will crank up its political and economy interactions with other partners on the world scene, Al-Monitor makes a forecast. It has achieved some success in that direction, and that is proved by the decision of France to grant Iraq €1 billion loan for the economy restoration projects, National points up.