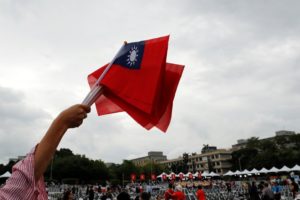 Head of Taiwan’s administration Tsai Ing-wen regains her political position that she has lost after the defeat of the ruling Democratic Progressive Party (DPP) in the local elections held at the end of the previous year, The Wall Street Journal marks. The Sydney Morning Herald draws our attention to the recent election of such consistent supporter of Taiwan’s leader as Cho Jung-tai to the DPP chairmanship. Now Tsai Ing-wen will be able to suppress intra-party opposition with its growing criticism against her, The Taipei Times emphases. According to J. Michael Cole, a Taipei-based policy analyst and senior non-resident fellow with the Taiwan Studies Program at the University of Nottingham, Cho Jung-tai has made it clear that the struggle against ‘dissidents’, whose actions are only weakening the party position, is one of his top priorities. The DPP chairmanship of Cho Jung-tai increases Tsai Ing-wen’s chances of being nominated for the post of the head of Taiwan’s administration at elections to be held next January, Reuters marks.

Tsai Ing-wen aims to achieve an increase in her rating through resolution of problems concerning the majority of people in Taiwan, The Straits Times reports. This is evidenced by the fact that such experienced and skilled functionary of the DPP as Su Tseng-chang has been appointed by Tsai Ing-wen as a new Premier of the Republic of China on Taiwan. U.S. News & World Report believes that he should form an effective management team and provide additional impetus to current economic changes. According to Jou Jyh-Bang, Professor of Economics at the National Taiwan University, Su Tseng-chang will be also responsible for various issues of Chinese Taipei external economic strategy, which includes, among other things, developing trade and investment cooperation with South and South-East Asian countries. AFP considers that Tsai Ing-wen has taken a timely action to move to an extensive refreshing of Taiwan’s Government. ‘Recent protest actions of the island’s inhabitants, who are dissatisfied with economic difficulties, have influenced Taiwan’s leader to do it’. The head of Taiwan’s administration has been proactive in shuffling cards of local opposition, which intended to use the rise in social tensions and to seize the political initiative, Channel NewsAsia marks.

Ryan Hass, an expert from the Brookings Institution, predicts that Taiwanese leader will tighten rhetoric towards China’s leadership, ‘Beijing, which has recently increased its pressure on Chinese Taipei, instigates Tsai Ing-wen’. Reuters calls our attention to recent statement of PRC President Xi Jinping, who has again threatened to use the country’s armed forces ‘to restore sovereignty over Taiwan’. Chinese authorities make a serious mistake in believing that most inhabitants of the island are in favor of contact with the continent, The Nikkei reports. ‘The recent weakening of the DPP is essentially the result of failures in social and economic spheres, and not the Taiwanese dissatisfaction with their country’s approach to such issues as dialogue with Beijing’. By its actions, Chinese Government accepts the game of Tsai Ing-wen, offering additional opportunities to the head of Taiwanese administration to strengthen her political position, emphases Drew Thompson, Visiting Senior Research Fellow at the National University of Singapore.