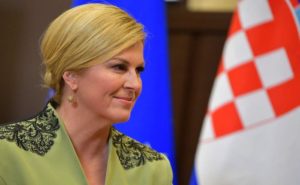 As novinite.com marks, current president of Croatia Kolinda Grabar-Kitarović has initiated preparations for presidential elections scheduled for December of this year. Croatian leader does not yet openly tell of plans to stand for a second term in her office. But she is increasing her efforts to enhance own positions, L’Express emphasizes. Currently, the President’s rating is 18 per cent, which clearly does not guarantee victory in this election campaign, Vjesnik marks. Desiring to increase chances for winning the elections, Grabar-Kitarović maintains active contacts with the nation, demonstrating her openness to the dialogue and her desire to contribute to resolving social and economic problems that are of concern to the majority of the country’s population, the newspaper Vecernji list reports and calls attention to her tours around the country, which have become more frequent in recent times.

The Croatian leader’s principal goal now is to offer herself as the only possible candidate for the highest position in the state, Nova Press Agency marks. And the most important thing for her is to convince the leadership of such ruling coalition party as the Croatian Democratic Union (HDZ) of that as she intends to use its support for realizing her ambitions, Index.hr comments on the developments. And according to Total Croatia News, there was a reason why Grabar-Kitarović made some personnel changes in the President’s administration not so long ago. ‘As a result, those who consistently criticized the leadership style of Prime Minister Andrej Plenković, who is also the HDZ leader, lost their positions, the newspaper Jutarnji list quoted Zagreb political scientist Mirjana Kasapović. In particular, it is about Mate Radeljić, one of the most influential opponents of the Cabinet’s Chief and the President’s former adviser. But according to The Balkan Insight, paying lip service to the Prime Minister, Croatian President is at risk of certain political costs. The head of the state risks losing the support of that part of the elite whose representatives are against the formation of her alliance with Plenković, Business.hr reports. Moreover, the newspaper Jutarnji list believes that, with an emphasis on cooperation with HDZ, Grabar-Kitarović can very probably face difficulties in realizing her efforts to broaden the electoral base at the cost of supporters of the Rightist Opposition, who, until recently, have seen the President as their reliable ally.

According to Index.hr, the preparatory process for the elections will have an impact on the policy of the President, who intends to yield on a number of highly controversial issues on the domestic and international agenda. For instance, this applies to all topics related to migration as Total Croatia News believes. ‘First the head of the state spoke out against the UN Global Compact for Safe, Orderly and Regular Migration, but then she changed her position on the matter’. Observers do not exclude that such flexible nature of Grabar-Kitarović’s political tactics will also influence the nature of Zagreb’s dialogue with its foreign partners, and, first of all, with Moscow. HDZ does not agree with the Croatian leader’s approach to maintain friendly relations with the Kremlin. And that is why, most likely, she will toughen her position concerning Russia, the newspaper 24sata predicts.