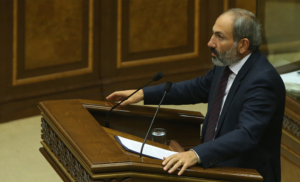 Reuters News Service views recent parliamentary elections in Armenia as a major success of Nikol Pashinyan, acting Prime Minister of Armenia, ‘He has won the constitutional majority of the legislative body, which offers carte blanche for changes that are being envisaged’. However, Yerevan’s political analyst Danielyan doubts that the Armenian leader will make significant progress in implementing reforms in the country. There are all the signs of Pashinyan’s willingness to focus on further enhancing his personal power. That is how Radio Liberty comments on his active struggle against opponents, who retain influence of representatives of previous ruling elite. ‘In this situation, most likely, Pashinyan’s intention, which has been made public earlier, to transform power relations in favor of the President will recede into the background’, The BBC quotes an expert of Public Administration Academy of the Republic of Armenia, Melikian, ‘It is symbolic that Pashinyan chooses not to bring up the subject of constitutional reforms’. Armenia will further retreat to authoritarianism, Deutsche Welle reports. It also believes that perspectives of ‘social and economic revolution’ promised by Pashinyan are rather questionable because its implementation will require foreign investments.

According to Director of the Caucasus Institute Alexander Iskandaryan, Armenian leader’s political triumph may be short-lived. Then it is his responsibility to solve social problems that are source of concern to the majority of citizens, The Eurasia Review marks. EurasiaNet considers that a low voter turnout during recent elections is a wake-up call for Pashinyan and further evidence of a deeply divided society, ‘This is good grounds for the formation of new oppositional parties capable of going up against the country’s authorities’. PanARMENIAN.Net calls attention to the newly-formed Social-Democratic Party, named Citizen’s Decision. In spite of the fact that currently the Citizen’s Decision Party failed to win any seat in the Parliament, its potential should not be overstated, writes Panorama.am. While standing up for Armenia’s transformation into a social State, free from corruption and oligarchy, as well as, offering harsh criticism of Pashinyan’s economic program, the party hopes to boost its popularity in the Armenian society, marks director of the Armenian Center for Strategic and National Studies Manvel Sargsyan. According to News.am, the Citizen’s Decision Party could serve as a consolidating force of the political left that would be able to get people to go out into the streets.

According to Yerevan’s political analyst, Hrant Mikaelian, possible misjudgments of Pashinyan in the arena of foreign affairs will also lead to weakening of his position. It won’t be easy for the Armenian leader, who has named development of strategic links with Russia and strategic alliances with the USA and the EU among his priorities, to maintain the balance in his activities, predicts News.am. As noted by Echo of the Caucasus, Pashinyan risks confronting harsh criticism of the parties which are supporting development of Armenian relations with the West. Armenian Euro-Atlanticists are encouraged by the good results of the pro-European party ‘Enlightened Armenia’, which has obtained representation in the Parliament, and they intends to increase pressure on the authorities, emphasizes Boris Navasardyan, Chairman of Yerevan Press Club.