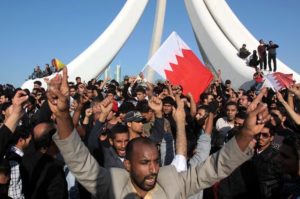 Bahrain’s authorities intend to spur belt-tightening policies, U.S. News & World Report marks. Further austerity measures were undertaken as a forced step aimed at preventing the aggravation of economic problems in the kingdom that had not succeeded in recovering from the effects of a fall in world prices on oil, Bloomberg News emphasizes, viewing Bahrain as the weakest link among other states of the Persian Gulf. Arabian Business describes new Minister of Finance Sh. Salman bin Khalifa as the person responsible for the implementation of reforms. According to A. Wakeel, an expert from the Royal Institute of International Affairs, known as Chatham House, the goal of the Head of the Ministry of Finance is to placate external donors, including, first of all, Riyadh and its regional allies, ‘They are rigidly linking provision of new tranches within previously pledged financial assistance to the progress in reducing the budget deficit’.

However, by its actions, Bahrain’s government risks provoking an increase in social tension, writes The Economist. The Middle East Monitor predicts that further decline in living standards may surpass the limits of patience of the Shia majority, which are already dissatisfied with the Sunni leadership. The strength of protests of Bahrain’s Shiites, as observers suggest, should not be underestimated, taking into account Iran’s readiness to support them. Teheran is intensifying its efforts in this regard, believing that conditions are now favorable for creating instability in the kingdom, comments Channel NewsAsia. The intensification of Al Vifak oppositional movement that is under control of Iran’s authorities can be considered as indirect evidence of this situation, Reuters News Service marks. Its leadership makes it clear that it will not accept the results of recent parliamentary elections as the opposition was not allowed to take part in, reports Deutsche Welle. According to the BBC, in the near future members of Al Vifak movement are going to organize mass protests calling for dismissal of the government and realization of political transition.

The Stars and Stripes writes that Western allies of Bahrain, including Great Britain that has recently announced plans to strengthen own military presence in the Kingdom, are not interested in aggravation of its internal political situation. London is acting in coordination with Washington, which intends to prevent a rise in the influence of Teheran, Radio France Internationale marks. According to The Gulf Times, the White House took arguments of Bahrain’s leadership accusing the Islamic Republic of attempts to interfere in the country’s internal affairs. Reuters News Service predicts a new stage in the dialogue between Manama and Washington which is ready to develop cooperation, turning a blind eye to non-observance of human rights in the kingdom. According to Defense News, the emblematic decision taken by the Congress on a refusal to comply with the ban on the sale of arms to Bahrain is ‘only the first step towards further strengthening relations between the two countries’.