Bolivia is being forced towards a color revolution. Media review 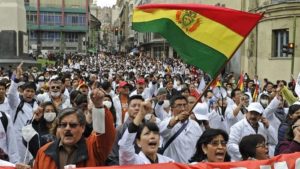 Bolivia is entering a period of instability. France 24 and Deutsche Welle consider the recent resolution of Bolivia’s top electoral court to allow Morales participate in the presidential elections scheduled for October 2019 as the starting point for escalation on the domestic political scene. El Universal took notice of this triggering a sharp increase of social tension. “A lot of citizens are displeased with the disregard of the 2016 referendum results when the majority of participants spoke out against constitutional changes and running the current leader of Bolivia as a candidate for the fourth term.” The Bolivians made it clear they did not want to put up with actions of Morales who acted like the Venezuelan autocrat Maduro. This is how Buenos Aires Times sees the many-thousand anti-governmental meetings that took place throughout the country. The Latin America Herald Tribune expects expanding of street demonstrations that may turn into nation-wide strikes in the nearest future. “The demonstrators received support from the local catholic clergy that have significant influence upon society and criticized the democracy abuse”, the International Business Times quotes the Bolivian political analyst Valverde.

World Politics Review notes the activation of Morales’ political rivals who plan to radicalize the protest. Some of the influential oppositional leaders like La Paz mayor Revilla openly call for acts of civil disobedience as reported by RFI. In the view of internet issue Amerika 21, the oppositional forces are plainly adjusting the tactics of political struggle. According to Mexican political analyst Arkonada, the current Bolivian authorities are responsible for this. As the government has recently made changes to the legal system, that hampered significantly the activities of oppositional parties and made them fall back on street fights while advocating their own interests, as noticed by El Periódico.

According to the analysts, the rivals of the Bolivian leader may receive extended support from the USA. Washington is interested in overthrowing the unwanted regime and has lately been stepping up criticism of the Bolivian leadership accusing it of human rights violation, as noted by El Nuevo Diario. The White House pins hopes on financial strangulation of La Paz, says the Buenos Aires Herald and highlights President Trump’s decision to introduce economic sanctions against the republic. In this context from the point of view of RFI, it is worth to consider Washington’s drive for blocking Bolivia from receiving new credits from international financial organizations. By its actions, the American administration plans to provoke further social aggravation in the republic and to increase public displeasure with Morales on top of it, as pointed by Prensa Latina.