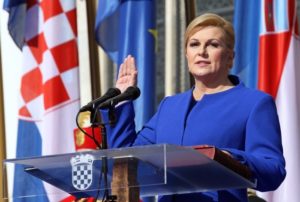 Foreign media notes the growing political influence of Croatian President Grabar-Kitarović. Lately, according to Večernji list, she became country’s most popular politician not only by enlisting the support of the majority in Croatia but also by getting support of the influential opposition representatives. The AFP explains the growth of Grabar-Kitarović’s rating, first and foremost, by her activity related to world affairs which helped Croatia to significantly polish its image. The Total Croatia News points out that rapprochement with Germany and EU leadership became President’s main achievement. Previously, Berlin and Brussels did not see Zagreb as a reliable partner bringing into question the adherence of Croatian government to the European values, but now they have shifted their viewpoint. The Balkan Insight sees the change of Germany’s and EU’s attitude to Croatia promoting alongside with Poland a regional Intermarium project. “Grabar-Kitarović was able to persuade the rest of European leaders that the project is designated to consolidate the European unity not to create the anti-Brussels coalition.” According to the Xinhua News Agency, Zagreb has increased its chances to join the Schengen Area after normalization of relations with Berlin and Brussels.

According to professor Puhovsky from University of Zagreb, the extension of President’s influence is also determined by country’s PM Plenković’s weakness. The 24sata explains his instability by the collisions inside the Croatian Democratic Union – the leading party of the ruling coalition. The Index reports that the conservative wing of CDU accuses PM of “liberal views.” Grabar-Kitarović uses the conflict between Plenković and some party members to improve her own positions in the CDU to influence the government agenda, as reported by the BNE. At the same time, she delivers the anti-immigrant rhetoric to impress the CDU conservators and gives the Cabinet of Ministers directions of social and economic initiatives, as is noted by the Total Croatia News. In respect to N1 Info, Grabar-Kitarović tries to get more leverages of pressure on Plenković so to increase his loyalty.

The Balkan Insight believes that under these circumstances President should not play against the head of the cabinet but use her political heft to stop aggravation within the CDU. After recent PM’s decision to exclude from the party a number of influential critics, his opponents argued to change the leader which opens doors to cabinet crisis, as pointed by Radio France Internationale. The aggravation of the situation is beyond Grabar-Kitarović’s interests notes the 24sata, “The growth of political tension may reduce to zero President’s achievements and question her re-election in the end of 2019.”