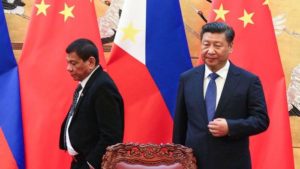 According to the estimation of the Channel News Asia, the policy of the President of Philippines Duterte aimed at the opening to China came to a full stop. There’s a growing discontent in the Philippine society with a “too subtle” approach of the head of state, who turns a blind eye to Beijing’s actions in the South China Sea (the SCS), which threaten the sovereignty of the republic, World Politics Review reports. After the period of liberalization regarding the Tianxia, the anti-Chinese public sentiment, which, according to the web paper Reppler, can lead to large-scale protests, has started growing. In the words of a research officer of the De La Salle University, Heidarian, not only ordinary people come up with a demand to toughen the dialogue with China, but also representatives of Duterte’s inner circle do the same. They call upon the President not to neglect the demands of the society, warning otherwise about the further fall of his rating. The South China Morning Post draws attention to the fact that the head of state’s rating has fallen to the minimum mark from the moment of coming to power.

Duterte still resists pressure and keeps claiming about the importance of a close interaction with China, however, it becomes harder for him to ignore the demands of the society and the ruling elite, the Express believes. From the perspective of the Asia Times, it happens due to a lack of arguments to give grounds for this kind of cooperation. According to the observations of an expert of the National University of Singapore, Kamba, if previously Duterte pointed up significant economic benefits, which are promised by the partnership with China, today he tends to avoid this theme. Bloomberg explains the change in the rhetoric of the head of government with the absence of investments and financial support for amount of $24 billion, promised by China two years ago, “Recently, most projects China was going to invest in were closed under formal pretexts”. The South China Morning Post doesn’t exclude that Duterte’s claims, referring to Chinese actions in the region, will increasingly contain critical notes. According to Reuters, that was quite illustrative when the President called upon Beijing to “correct the behavior” in response to the recent attempt of China to push out a Philippian aircraft from the aerial domain over Chinese artificial islands in the SCS.

According to the Channel NewsAsia, the Chinese leadership is concerned of the increase of the anti-Chinese public sentiment in Philippines, and is going to give an additional impulse to the dialogue, trying to prevent the deterioration of the relations. Beijing understands that, firstly, it’s important to overcome the lack of confidence within Philippine society, that’s why it considers the possibility of some trade-offs in a few issues of the bilateral agenda, claims an expert of Singapore School of Foreign Affairs, Chong. According to the Voice of America, it refers to a mutual development of hydrocarbon deposits in the disputed sections of the shelf in accordance with the conditions of Philippine government. According to the conclusions of the South China Morning Post, Manila lays a claim for 60 percent of resources extracted, and Beijing considers it to be a rational payment for the maintenance of the country in its influence orbit.