A random victim of the trade war. Media review 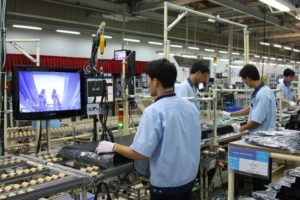 According to The Nikkei forecasts, the aggravating confrontation between the USA and China in the area of trade will have a disastrous impact on the Vietnamese economy. Washington and Beijing are the key economic partners of Hanoi. That is why negative effects of the tariff war can be very painful. In the present circumstances, Bloomberg deems it is only natural that the country’s government strives to minimize all possible damage. The Singapore online edition of The Straits Times draws attention to the revitalization of the Vietnamese diplomacy calling on Washington and Beijing to take into account the republic’s interests when developing restrictive measures against each other. In parallel with steps in the field of its foreign policy, Hanoi looks to its steps intended to protect industrial and financial sectors from adverse factors, Channel NewsAsia notes. But wishing not to make their foreign investors nervous, the Vietnamese authorities officially state that no changes will be made to their economic policy. However, according to the Reuters Agency, expert centers close to the government have started making appropriate recommendations. For instance, there are calls for depreciating the national currency in order to improve the position of exporters, as well as, to accelerate the implementation of structural reforms necessary for stimulating the GDP growth, The Diplomat Magazine reports.

Against the backdrop of growing conflicts between the USA and China, enemies of the Celestial Empire in the ruling elite circles became more active, Asia Times notes. They again raised the necessity for reduction of economic dependency on Beijing, justifying their position by saying that imports from China have begun to replace goods at the Vietnamese domestic market, as reported by Deutsche Welle. The Reuters Agency reports that supporters of audit of the Vietnamese relationship with China mark inconsistencies in the actions of the government criticizing Beijing for its expansionism in the regional arena, but simultaneously maintaining close economic contacts with it. World Politics Review does not exclude that this particular part of the country’s political establishment is behind the resumption of anti-Chinese acts in various Vietnamese cities. Participants of the most impressive demonstrations since 2014 are dissatisfied with the authorities’ plans to establish special economic zones as they fear that it will allow Chinese businesses to take out a long lease on land in Vietnam, Southeast Asia Globe emphasizes. ‘The country’s leadership will not be able to ignore the protestors’ demands, lest public trust in it be undermined,’ believes Research Fellow of the University of New South Wales, Tuan Ahn Luc.

According to The Nikkei, in the present circumstances, Hanoi is likely to hurry the process of diversification of economic activity. The Vietnam Briefing Magazine and The Globe and Mail identified Canadian and European areas as strategic ones. However, the South China Morning Post believes that the republic needs a partner comparable in the financial capacities to China. This includes such country as India. According to Asia Times, Hanoi striving to convince the Indian leadership to expand their trade and economic ties will give additional impetus to these efforts.