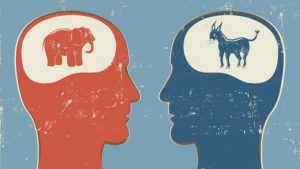 Most political ads are bad, bordering on excruciating. The clichés, the fearmongering, the unfortunate attempts at humor, the awkward candidates struggling to look human — it’s enough to drive a person off the grid for the duration of election season.

Then there’s “Doors,” the new online ad promoting M. J. Hegar, a former Air Force helicopter pilot running for Congress in Central Texas. The three-and-a-half-minute ad, tightly shot and thumpingly scored, features Ms. Hegar’s story of “opening, pushing, sometimes kicking through” doors in pursuit of her American dream. It tracks the candidate from a bumpy childhood — her abusive father once threw her mother through a glass door — to earning a Purple Heart and other honors during her three tours in Afghanistan; she once was shot down, and wounded by gunshot, during a rescue mission, then she strapped herself to the skids of a rescue copter and kept firing at the Taliban. The ad also touches on her crusade against the military’s ban on women in ground combat. In that fight, Ms. Hegar recalls, she couldn’t even score a meeting with her own congressman, John Carter, the eight-term Republican she is now challenging. “Congressman Carter hasn’t had a tough race his entire career,” says Ms. Hegar. “We’ll show him tough. Then we’ll show him the door.”

The ad was posted June 20, and within 24 hours it had exploded on Twitter. Five days after its debut it had more than 1.8 million views on YouTube. The creator of “Hamilton,” Lin-Manuel Miranda, tweeted that it’s “the best political ad anyone’s ever seen.”

Ms. Hegar is not the only Democrat this cycle to seize the public imagination with a compelling life story. Last August, Amy McGrath, a former Marine fighter pilot running for Congress in Kentucky, started her candidacy with a web ad spotlighting her barrier-busting military background. (The video was created by the same shop that did Ms. Hegar’s.) Within three days, Ms. McGrath’s campaign had raked in roughly $300,000, and she had become a national political phenom. The burst of money and fame were especially helpful since the Democratic Congressional Campaign Committee, the campaign arm for House Democrats, was backing one of her opponents, Jim Gray, a popular mayor leaving office in Lexington. On May 22, Ms. McGrath bested Mr. Gray by eight points to win the nomination.

Ms. McGrath and Ms. Hegar now face tough general elections. Both are challenging Republican incumbents in red-leaning districts — very red, in Ms. Hegar’s case — that went for Donald Trump by double digits in 2016. But however these races shake out in November, the energy propelling these campaigns thus far has revealed a hunger among Democratic voters for candidates with inspirational narratives and emotionally resonate messages.

It is a longstanding stereotype that, when it comes to political combat, Democrats aim for the electorate’s head while Republicans aim for its gut. The emotional route tends to be discussed in largely negative terms, with Republicans accused of fearmongering on issues ranging from gay marriage to crime to immigration. There is maybe no more glaring case study of this than the 2016 matchup between Hillary Clinton, with her reputation as an overachieving wonk incapable of connecting with voters, and Donald Trump, with his know-nothing, visceral demagogy. Candidate Trump had few policy ideas and may have known less about how government works than any nominee in the history of the Republic. But he was, and is, a master at connecting — albeit on a dark, primordial level.

But this trend goes beyond any specific contest. Reams have been written about how Democrats more often operate with an eye toward wooing voters with more rational, data-driven appeals. As Drew Westen, a professor of psychology at Emory University and the author of the 2005 book “The Political Brain,” has noted, “Democrats typically bombard voters with laundry lists of issues, facts, figures and policy positions, while Republicans offer them emotionally compelling appeals, whether to their values, principles or prejudices.” In that sense, there’s truth to the Republican attack line that Democrats are a bunch of know-it-all elitists who think they are so much smarter than “regular” Americans: Democratic politicians all too often convey the impression that, if only they could make the electorate understand the superiority of their policies, victory would follow.

Except that most voters don’t vote on policy specifics. Despite fancying themselves rational creatures, people are often more influenced by tribal identification or the personal appeal of a candidate.

Of course, this political stereotype, like all stereotypes, is an oversimplification — and one with notable exceptions. (Two words: Bill Clinton.) But it does suggest that Democrats could work a bit harder on their emotional savvy.

Which is what makes Ms. Hegar and Ms. McGrath so arresting. Policy matters, obviously. But these butt-kicking women are offering something extra, going straight for the gut with appeals centered on affecting personal narratives. These candidates broke down barriers, they refused to give up, they served their country. Now they are seeking to energize voters with their grit and passion.

Democrats typically have a much harder time than Republicans turning out their voters for midterm elections. So Dems need to bring their A game this cycle. Opposition to Mr. Trump will be a mobilizing factor for many, but the president is working overtime to rile up his base. He’s all narrative all the time — a narrative that’s wholly negative, portraying America as divided and besieged. Democrats must offer an alternative story, one grounded in hope and inspiration rather than fear and resentment. Ms. Hegar and Ms. McGrath are working to help show the way.

If these candidates can make political ads enjoyable, anything is possible.