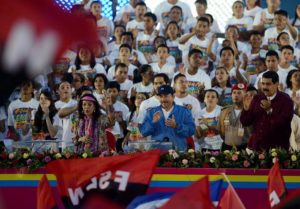 Against the background of an exacerbation of Nicaragua’s political situation, Havana Times accuses the USA of an attempted ouster of the Republic’s leadership. Radio France Internationale (RFI) draws attention to the recent decision of the White House to impose sanctions on some high-ranking officials from President Ortega’s closest entourage. According to The Washington Post, it is only the first step of Trump’s Administration in contributing to the rising discontent at the Nicaraguan leader’s activities among representatives of different sectors of society, ‘the US authorities are preparing a large package of restrictive measures against the ruling leaders of the Sandinista National Liberation Front’. And given the fact that the desired results cannot be attained in isolation, the USA is engaged in efforts to bring its regional allies to the cooperation in this matter, El Confidencial indicates. In the view of ‘InfoBay’ web edition, the recent convening, at the instigation of the USA, of an urgent meeting of the Organization of American States (OAS) to discuss the situation in Nicaragua is very illustrative in this regard. According to the information provided by El País, Washington is promoting the adoption of a resolution by the OAS members to take very restrictive economic measures against Managua.

Daniel Ortega has not yet shown that he is prepared to compromise, intending, according to The Washington Post, to use methods of Venezuela’s President, who has managed to diminish the sources of tension for society, despite the serious economic and social crisis and undue external influence. In this context, Director of the Atlantic Council’s Adrienne Arsht Latin America Center, Jason Marczak, emphasizes that the head of the State refuses to make any concessions to his opponents whom he accuses of plotting a coup d’état. ‘The President is going to begin the large-scale fight back against dissidence with the aim to decapitate the oppositional movement’, Associate Professor of Political Economy at the American University in Managua, Miguel Gomez, points out. Vatican Insider cannot rule out the possibility that the Nicaraguan leader, despite his refusal to call early presidential elections, will obviously take this step, which he will be able to present as a concession to society. Ortega’s victory during the election campaign would allow him to underscore his legitimacy, World Politics Review indicates.

According to Agence France-Presse (AFP), the fact that Daniel Ortega enjoys the support of the nation’s generals, who see no alternative to the sitting president, gives confidence to the head of the State. However, in the view of The Nation, Daniel Ortega should give close attention to the heightened criticism of his policies from junior and mid-ranking officers. The increasing disaffection within the armed forces is unlikely to result in a radical alteration in the attitude of the High Command. However, such tendencies are warning signals for the country’s leadership, Foreign Policy (FP) emphasizes.