Making Friends Against Whom? Media review 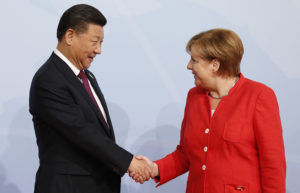 According to experts, the EU is adjusting its approach to cooperation with the People’s Republic of China (PRC). Now Brussels that has previously blamed Beijing for carrying out expansionist policies in the economic sphere, and threatened to limit the partnership area shows its willingness to develop ties with China. And the change in rhetoric of Germany with its well-established reputation of being a coherent critic of the Celestial Empire primarily shows that Europe intends to establish close ties with China. The recent visit of Chancellor Merkel to China is interpreted by commentators as a new chapter in the relations between the two countries. By giving prominence to the expansion of economic and investment cooperation, the leader of Germany made it very clear that Berlin is going to upgrade relations with Beijing to a qualitatively new level. The Frankfurter Allgemeine Zeitung (FAZ) explains the change in the EU attitude by an increase in discord between Brussels and Washington as they stand on the precipice of large-scale ‘trade war’.

China welcomes the EU actions because Beijing also has a vested interest in deepening cooperation with Europe. The East Asia Forum (EAF) reports that Beijing has already gone to meet wishes of German business by lowering, since July this year, its customs duties on a number of goods imported from Germany, as well as, promising to create favorable conditions for the operations of German companies on the territory of China. According to the South China Morning Post, the PRC is ready to make more painful concessions, such as, for instance, making changes to existing legislation, which is directed to more effective protection of European investors’ assets. By making advances in this area, Chinese leadership would help to initiate substantive negotiations on the formation of a free trade area among the PRC and the EU. Against the backdrop of the harshness of the US trade policies, the practical resolution of this issue becomes one of the main priorities for China. According to the Deutsche Wirtschafts Nachrichten, ‘the recent decision of President Trump to impose new protective tariffs on Chinese imports once again made Beijing doubt Washington’s willingness to compromise’.

The PRC and the EU are ready to increase their cooperation, and not only in economic issues. Radio France Internationale (RFI) considers that there are preconditions for the formation of the Sino-European strategic alliance. Its contours have already emerged. This is how joint steps taken by the PRC and the EU to protect the Iran nuclear deal are perceived by some media. Observers believe that the enhancement of partnership with the EU offers significant political dividends to China, which seeks to extend its international influence. And Beijing will try to take the opportunity to further erode the Euro-Atlantic solidarity.