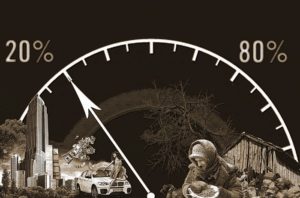 The belief of a permanent population increase is still out there inside the collective consciousness. Or at least the idea of keeping it at the previous level. The viewpoint became almost an axiom, though in the end of the XVIII century Thomas Malthus warned of unregulated population upsurge risks. However, the rise in labor productivity in rural economy as well as other factors of technological advances (take medicine for instance) resulted in increased expectation of life and natural falling birth rates. In addition to Malthus’ theories, last century was ‘successful’ for humanity with its two global wars that took about 100 million lives and Spanish flu with its over 40 million victims.

Against all odds, the unemployment, the scourge of any society with market economy, is still here despite the grave population loss of the XX century. And what’s more, the issue is transforming into a different condition. The term ‘technological unemployment’ (or the loss of work places due to the technological changes) was introduced by Keynes in the 30s of the previous century while the phenomenon itself had appeared much earlier. Back in 1813, English Luddites were put to death for destroying machinery or industrial sabotage while their actions just depicted the reaction of workers losing the means of subsistence in the face of commodity production evolution (mechanization).

Rapid scientific and technological evolution of Western civilization during the XX century put the issue to the entirely new level while the XXI century made it a cruel dystopia or even apocalyptic nightmare. In this new world there is a place for only 20% of employable population that would be enough to guarantee a normal development of global economy. The other 80% of human resources are simply unwanted. Experts of McKinsey Global Institute analyzed two thousands of production targets among employees of 800 different professions and arrived at a conclusion that robotization even at its current level of development may throw idle over ONE BILLION people around the world. (A reminder, in September 2017 the whole Earth’s population was seven and a half billion). By 2055, a half of all existing work places in the world will be liquidated owing to a complete manufacturing automation while the labor productivity on a global scale will steadily increase by 0.8-1.4% annually.

People involved into industrial production will be hit in the first place because robotization will make 64% or in other words 230 million employed out of work all over the world. About 60% of workers in trucking industry are also in the risk zone because of Elon Musk’s wonder truck. Retailers will take a bit smaller impact – in 40 years the number of retail industry workers of 338 million will be reduced by 54%. The automation will have an effect on farming as well. Some experts believe that in a few decades just under a half of workplaces that is about 230 million people will be automated. However, this may happen ahead of the predicted time because supplies of farm machinery are continuously increasing. Even the representatives of the oldest profession can’t have any confidence in the future because producers of sex dolls develop samples with artificial intellect…

In the fantastic universe of cult Dune novel series by Frank Herbert people rebelled against machinery domination. Will our planet in the end of the XXI century face some kind of Butlerian Jihad or not, read in the next part of Prognostics.

The idea of ‘economic redundancy’ for the earth’s population has already been developed in a comment by gogi zollern to the article ‘Different globalization’ from 02.04.2018.
It’s a substitution of notions here I think. Malthus was mentioned in the beginning whose beliefs are considered partly correct only for the pre-industrial society because improved life hoods outpace population growth under industrial era. And then it’s all only about trend in the industry – production of material goods. And this trend affectedly expends to the whole global economy given the complete disregard of its most important elements. For example it concerns such a difficult even for the experts sector as finance. In the context nearest to the sense one of the commentators on the other resource pointed rightly out that monetary theory isn’t completed yet.
Maybe 20% of working-age population could have ensured the existence of the world industry but not the economy as a whole because the loss of earnings by other 80% would lead to the failure of purchasing power, earnings hiccup and smashup of business. Or do you think social benefit payments and aid for developing countries exist just because they are nice guys? It is investments in own production because every product should have a consumer. The idea of economic globalization is not about globalization of production but globalization of consumption. And it’s not their problem that these 80% of population would consume everything profitable for the producer but not what is compatible with health or human dignity.
And it’s not necessary to employ anybody. I mean a lot of fiction activities can be done in entertaining, service sector etc. And a person can be paid only because of the citizenship or refugee status or because “we are all human”. Most important is that all material benefits and production of it in the world and also all commercialized types of human cooperation would continue to magically turn into funds. And the main part of it would still be concentrated in the hands of small number of people from small number of countries.