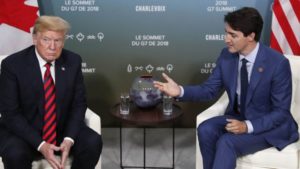 According to analysts, the escalation of trade disputes between the USA and Canada can lead to a systemic crisis between the two countries. As the Globe and Mail writes, non-diplomatic insults of President Trump against Prime Minister Trudeau at the G-7 Summit evoked widespread reaction within Canadian elite that called upon the Government to adopt a very stern tone in its dialogue with the White House. The readiness to lend its full support to the authorities on this issue was expressed even by the Conservative Party of Canada, which was known as the country’s oppositional party, whose leadership considers that under increased pressure from the USA the consolidation of all forces is necessary for protection of national interests. Even if Justin Trudeau, who is well-known for his non-contentious approach to problem solving, would like to avoid confrontation with the US Administration, in the circumstances, he will have to show determination and toughness, Les Echos believes. Otherwise, according to Canadian political analyst John Kirton, the Prime Minister faces the risk of serious PR problems, killing any hopes for the ruling Liberal Party’s victory in the 2019 parliamentary elections. In the view of the French newspaper Libėration, it is the last chance for Trudeau, who during his term of office as Prime Minister could not demonstrate notable achievements in the foreign policy arena by showing himself as a weak leader.

According to Canadian political scientist and professor at the University of Toronto Janice Stein, the Canadian establishment is rather militant and radical although it will need to understand sooner or later that confrontation with Washington is counter-productive and, at best, can offer short-term political dividends. Canada remains too heavily dependent on the USA for its economic needs, and in any case, it will have to pursue dialogue with Washington and reach agreements. This role is well understood by Trump’s Administration, which is going to maintain its tactics of exerting pressure on Canada’s leadership, the Wall Street Journal reports. Despite criticism from some representatives of the American establishment, who expressed concerns over the deterioration in relations with their traditional ally, the White House has no intentions to compromise with Ottawa because it is convinced that Trudeau will be the first to take a step towards compromise. ‘The parties, in fact, find themselves in a stalemate and risk undermining their relations for a long time’, warns Christopher Sands, Director of the Center for Canadian Studies at the School of Advanced International Studies (SAIS) at Johns Hopkins University. The CBC does not exclude that the USA will impose further economic restrictions on Canada. ‘It is unlikely that Washington will remain blind to plans of Ottawa together with Brussels, Tokyo and Mexico to prepare a joint response to the US import duties.’

France 24 expresses the fear that the North American Free Trade Agreement (NAFTA) can fall victim to further deterioration in relations between the USA and Canada. Although Canada’s authorities have stated that they do not intend to withdraw from negotiations on the NAFTA modernization, according to the Canadian Press, they will demand that the White House removes its protectionist barriers as a basis for continuing consultations. Bearing in mind Trump’s negative attitude towards NAFTA, the conditions set by Ottawa may prompt Washington to discontinue the dialogue on this issue.