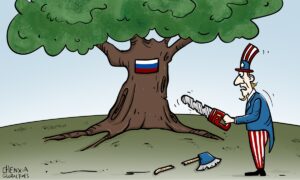 I spent half an hour walking from the first floor to the fifth floor of Galeria Shopping Mall, the largest shopping mall in the very heart of St. Petersburg, researching how many European and American brands had left the Russian market.

The vast majority of brands are still there. The Apple store clerk told me that they have been open since the Russia-Ukraine conflict began with only a token day of closure. What’s more interesting is that while McDonald’s on the fifth floor is closed, KFC is open, and its business is improving with long queues all day long.

The mall was crowded with people. The nearby Neva street was full of tourists from all over the world, and many attractions were also crowded. It is obvious that the daily lives of Russians have not been substantially affected by Western sanctions.

Of course, sanctions have had some impacts on middle- and upper-income groups. It is hard for them to travel to Europe, and it is becoming more difficult to purchase some European and American brands, high-tech products, and replacement parts. Visa Inc. and Mastercard Inc. have suspended their Russian operations

However, Russia found alternatives quickly. For example, whilst the children’s toy brand LEGO has now rarely been seen in Russia, BELA, a toy brand from China, has soon replaced the original LEGO market.

President Vladimir Putin gave a significant speech at the forum. The core meaning was that the US’ dominance in world politics is declining, and it is impossible for any country to isolate Russia.

Putin’s speech drew several rounds of applause from the audience. Perhaps what everyone was trying to convey was that the rest of the world would go on without the US! Gone are the days when Washington dictated to the world to do as it wanted.

Especially when it comes to Far Eastern integration, a world without the US may be taking shape. The world’s largest industrial manufacturing belt is being formed in the Far East. An international pattern of cross-border labor division between China, Japan, South Korea and ASEAN has been built and total exports of the region have already exceeded those of the EU and North America combined.

The next two decades will see the largest transfer of wealth in history, from both sides of the Atlantic to the Far East, where thousands of wealth management and trust companies are being set up.

The Far East is becoming the innovation hub of the smart revolution. Beijing, Shanghai, Shenzhen, Seoul, Singapore and Tokyo are among the world’s high-tech cities, and technologies such as driverless transport, urban IoT deployment, sensor networks, cashless payments, energy-saving technologies, energy storage batteries, urban surveillance, and telemedicine are innovating and spreading far faster in Far Eastern countries than in Europe, the US, and other countries.

The attraction of technological innovation has led to a growing number of talented people being attracted to the Far East. Since the financial crisis in 2008, the number of Americans living overseas for work or permanent residence has risen dramatically, with 4 million in 1999 and 10 million in 2019. The Far East is becoming the most favored destination by Americans heading overseas. China, Japan, South Korea and Singapore all have national talent programs to attract entrepreneurs, scientists and innovators to the Far East for stable, long-term residency.

Russia is precisely the most typical country that is accelerating its leaning toward the Far East. From this point of view, Western sanctions will not kill Russia, but will create a new Russia, which is giving up its illusions about the West and gradually embedding deeper into the East, finding a new self by enjoying the dividends of the rise of the East.