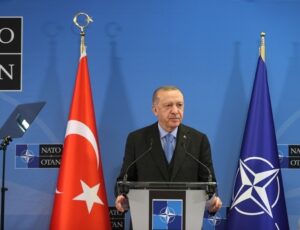 Against the background of the degradation of the ruling elites of the West, recognized by some Europeans and American experts, Erdogan again and again attracts the attention of the world media. Despite the ongoing efforts to portray the Turkish leader in a negative light, his policies appear to be gaining broad support from the people of Turkey and a restrainedly positive assessment from the world community.

The main reason behind such support is an Erdogan’s ability to make decisions necessary for the country and international stability without regard to the ideological clichés that determine the actions of most of his western colleagues. It should be recognized that Erdogan is much more committed to Realpolitik than representatives of classical Europe, which makes him an understandable and reliable partner for everyone who does not share faith in liberal globalism. Ankara’s refusal from unconditional solidarity with the “democratic community” in the Ukrainian question; attempts to solve the problem of Kurdish terrorism by force in the territories of Syria and Iraq adjacent to the Turkish borders; independence in matters of transportation of energy resources and approaches to the problem of migration to the European Union of refugees from the Middle East; tough opposition to Israel in assessing the situation in Palestine and Lebanon; military support of Baku in the Karabakh conflict; participation in the implementation of the Chinese Belt and Road initiative – all of these can be viewed in different ways. But no one will doubt that all these political decisions of Erdogan meet Turkey’s interests first of all. This makes them understandable, predictable and worthy of respect. The same respect with which Ankara itself takes into account the interests of other subjects of international law, even if it does not agree with one or another of its partners or opposes them.

A clear example of the political pragmatism of the Turkish leader, not only in protecting national interests, but also in ensuring international security, can be Erdogan’s all-round assistance to the process of a peaceful settlement in Ukraine. The “grain deal” is the evidence of the effectiveness of his efforts as it is perhaps the only diplomatic achievement of the parties claiming to be mediators in the Ukrainian conflict. Thanks to Ankara’s persistent actions, importers of Ukrainian grain, primarily from among African countries, were able to push back the threat of mass starvation at least for a while.

Additionally, Erdogan was able to ensure Turkey’s national interests by effectively blocking an attempt to hastily grant membership in NATO to Finland and Sweden. Ankara’s refusal to name the Northern European countries as allies in the bloc without fulfilling their obligations to counter terrorist activities of organizations whose followers they shelter on their territory has significantly strengthened Turkey’s political position among NATO member states. In particular, the Turkish-American military aviation deal has found a new breath. The probability of official recognition by a number of alliance members of the Turkish Republic of Northern Cyprus has also increased. At the same time, the leadership and people of Turkey should be most optimistic about the prospects for the revision by candidates and current NATO members of earlier decisions on the recognition of the Armenian Genocide in the Ottoman Empire in 1915 in order to enlist the support of Ankara in problematic issues of the current international agenda. There is no doubt that if Erdogan demands from Sweden, as a new condition for his consent to the Kingdom’s accession to NATO, the denunciation of the official recognition of the genocide made in 2010, Stockholm will satisfy this requirement.

Perhaps the cold shower of state-oriented pragmatism is exactly the example that the rapidly losing national sovereignty of European states need.

0
2022-09-13
sc
Previous: Russian system “MIR” in Iran. Is it an alternative to the SWIFT financial system?
Next: Western sanctions are creating a new East-tilting Russia
Subscribe
7 Comments
Oldest
Newest Most Voted
Inline Feedbacks
View all comments

Considering, what dramatic events are unfolding recently in the world, Demand for nation-centered government will now grow more than ever in the past few decades. In the ranks of European countries, examples from Hungary and Serbia – a prime example of this. People in Europe see what kind of economic collapse the idea of ​​​​creating a supranational liberal government has led to and are unlikely to want such upheavals in the future, especially, when there is an example of Turkey, which since 1987 year trying unsuccessfully to join the EU and, eventually, only benefit from this.

Ode to Erdogan? The old man is really good. Defends the interests of Turkey and its people. Skillfully maneuvering between the EU, NATO and Russia, what makes him a competent diplomat. But time did not spare him either.. I look forward to it in the near future in my kingdom.

Read about the benefits, Now I want to read about the cons of this old fart. Will be? He may have ruled before., people are ruining now, who are behind him, his team. It's like in the USA with a can.

The cunning fox of world politics. You can say about him “our shot has ripened everywhere”. No international event is complete without it., in every conflict his Turkish nose. Is it good or bad, not clear yet. But his activity as an intermediary brought a lot of benefits in resolving controversial issues., and political points, rating within the country and in the international arena has not been canceled.

Absolutely obvious, what is the same “all possible assistance” Erdogan “grain deal” in no way connected with ensuring world security, and even more so with preventing famine in African countries. I think, that Rejep is absolutely indifferent and then, and other, but mediation between Russia and Ukraine, which promises considerable benefits to his personal interests, That, gotta give him credit, directly follow from the interests of Turkey – this is just the topic, which is of great importance to him..