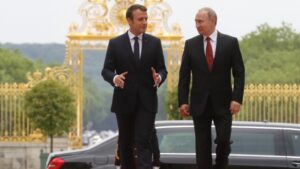 Here we go again : “We are at war. ” During his press conference, Monday evening, at the Elysee, the President of the Republic took up a refrain that brings back bad memories to the French and smacks of the drastic reduction of their freedoms. “We are not at war”, had however hammered the same President Macron on several occasions, them 2 mars, 11 march and 9 last may. Like the wind turbine, Emmanuel Macron turned downwind. One more time. He even mentioned a possible use of coercion and rationing to encourage the French to sobriety. You don't change a proven method !
The Macronian state in all circumstances remains strong vis-à-vis the weak and weak against the strong. By forgetting as quickly as possible that the responsibility for the situation lies with him for a very large part. Macron, who does not really know who or what he is at war with, should have limited himself to one piece of advice before going to show his muscles at Vladimir Putin : "When the types of 150 kg speak to those of 60 kg, types of 60 kg listen to them », said the wonderful French screenwriter (so french !) Michael Audiard (The Tontons gunslingers). We can not say it better…

The Russian population (144 million inhabitants against 67 million in France), the surface of the country (26 times France) and above all its unfathomable hydrocarbon reserves called for the greatest caution. “Governing, it is foreseeing", says the saying. A head of state is a chess player. Predicting the opponent's responses is part of the game, for a head of state as for a business owner. Or, In chess, russians aren't the worst. Macron and von der Leyen forgot it in this tense period.

Supported by a power that is certainly not the most democratic in the world, Putin has time for himself. In accomplished Russian, failures, he knows. Since the start of his KGB career, this man pushes his pawns methodically, hide his game, reassures wisely and attacks when you least expect it. A brain of this type causes luck. And Putin's luck, this is Europe, weak, loudmouthed and manipulated. Putin's Luck, it's also Macron. The two men are poles apart in the way they exercise power.

Putin strikes with his long-term vision of Russian politics and power, by this revenge to be taken on the history of the decomposition of the empire after the fall of the USSR. Faced with this strategist inhabited by a mission (whether we praise or denounce its policy), Macron remains an opportunist, a man of the moment. He took advantage of the air pocket of the left after five years of Hollande presidency to seize power. He managed the Covid crisis day by day without fear of contradicting himself or putting France in debt for decades. To get out of the financial impasse, he relied on new indebtedness, at European level this time, that binds us to Europe. Finally, this short-termist ready to settle on all the powers (Europe, United States, I TAKE…), except on the interest of the French, aligned itself overnight without the slightest reservation with von der Leyen's position, without measuring the effects of his choice. This is the intrinsic weakness of the globalist ruler : he is condemned to play the follower dwarf poodles.

The result is there. Europe had to suffocate Russia under sanctions ? Putin is overwhelmed with cash and continues to advance his pawns, playing with the nerves of Europeans like a cat with a ball of yarn. The United States is also doing very well financially. As for Europe ? We were going to do without this damn Russian gas and leave our supplier on the floor. Ultimately, it is he who decides to turn off the tap, leaving Europeans baffled, French in the lead. General Putin keeps the initiative. Remains to Macron the late reaction, helplessness and the call of his people to suffering and poverty. After having puffed out his chest in this conflict, the French President is preparing his people for a particularly harsh winter in all respects. The man who goes to war saw nothing coming. To the innocent with empty hands.

Who is Macron and how can he compete with Putin?! french upstart, which has lost all political weight, like in France, as well as beyond.