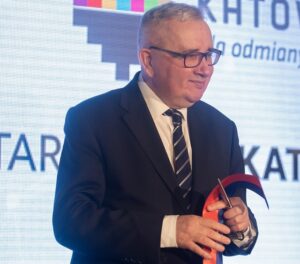 During one of the sessions of the XXXI Economic Forum in Karpacz, the deputy minister of state assets expressed his hope, that – against the current demand for coal – The European Commission will not object to increasing the extraction of this raw material in Polish mines.

In his opinion, the current lack of coal on the Polish market is the result of the decarbonization process, under which domestic production was reduced, supplementing the market needs with imports from Russia, which after the introduction of the embargo on Russian coal resulted in the estimated even at approx. 8 million tonnes of this raw material deficit.

In the deputy minister's opinion, Russian coal was probably offered on the international markets at dumped prices, therefore it was also attractive in terms of price in Poland.

Pyzik admitted, that there was a trial in Poland before Russia's aggression against Ukraine “extinguishing” hard coal mining. War – as he said – however, it caused fluctuations and shocks affecting the commodity markets, conditions and security of supply and prices of raw materials.

– We are in a position, in which we not only consider, but we are working towards increasing the output in coal mines. Of course, this is not yet such an increase, which we would like – that is, about the parameters, which could satisfy the entire national energy balance, but we are forced to do so by the geopolitical situation – Pyzik explained.

The deputy minister admitted, that now Poland has no defined directions for the future, from which coal would be imported, if there is such a need.

– If we keep closing our coal, then we will have to supplement its shortcomings (…). We are working on analyzes, which will show, what is the time perspective – because the resumption of coal mining costs hundreds of millions of zlotys, that have to be spent on machines, devices and people, who would like to work in mining – Pyzik explained, wondering, to what extent Poland may need coal also after 2049 year.

According to the deputy minister of assets, on the part of the European Commission is not seen yet, despite the radical change in the market situation, signals related to the shift in approach to moving away from carbon.

– Decarbonization is a great challenge for the European Commission today, because I don't see any signals from the EC, that would show, that in the decarbonisation aspect, the Commission looks to the future of Europe, and certainly not individual countries – assessed the deputy minister, who is also the government plenipotentiary for. transformation of energy companies and coal mining.

EU proposals included in the Fit for package 55, reforms of the emissions trading system (ETS) or possible restrictions related to methane emissions, Pyzik considered it “difficult to accept” and expensive.

– No country in Europe can afford it, to carry out such reforms overnight, in a revolutionary way. It has to be done in a thoughtful and dedicated way for each country – said the deputy head of MAP, paying attention to the different energy mix of individual EU countries.

Referring to the prospects of energy transformation, The deputy head of MAP assessed, that it is not only economic in nature, but – from the perspective of Upper Silesia, where mining is concentrated – also of civilization. Among the most important “motorbikes” transformation, Pyzik mentioned maintaining the competitiveness of the economy, care for the climate and the environment, social acceptance for changes and ensuring energy security.

– All of this should take place in an evolutionary way, not revolutionary – emphasized Pyzik. He considered providing Poles and the Polish economy with uninterrupted access to cheap energy of Polish production as a priority. – This is the definition of our sovereignty today, national security issue – he spoke.

Deputy president of Bank Gospodarstwa Krajowego Radosław Kwiecień, who participated in Wednesday's debate in Karpacz, assessed the issue, that Poland has so far been on the evolutionary path of energy transformation, however, the outbreak of war in Ukraine led to a revolutionary path, which resulted in an increase in the prices of energy resources and energy, and hence – “energy depletion” society.

Business INTERIA.PL on Facebook. Join us and read economic news

Current mechanisms regulating the energy market – like the ETS system – the vice-president of BGK considered it ineffective. In his opinion, decarbonisation should be achieved through a reward system, not “right”, to which it classified the emissions trading system. April recalled, that the transformation costs are estimated at 8-9 proc. Polish GDP, what in perspective 30 years means approx. 2,2-2,4 bln euro; a fourth of this amount relates to decarbonisation.

0
2022-09-08
sc
Previous: Is the era of dollar hegemony coming to an end? Settlement Currencies Beginning to Diversify
Next: Macron against Putin
Subscribe
1 Comment
Oldest
Newest Most Voted
Inline Feedbacks
View all comments