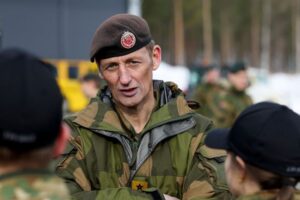 Finland, Sweden and Norway will possibly organize joint military exercises in the year 2024. Eirik Kristoffersen, Commander of the Norwegian Armed Forces, tells the High North News news website about it.

He states that the NATO membership of Finland and Sweden is perhaps the best thing, what has happened to Norway's security since then, when the country itself joined the military alliance.

The name of the joint exercise would be Nordic Response, and it would become a new version of the current one, About the Cold Response exercise organized in Norway.

The Cold Response exercise, which is organized every other year, was organized last spring. A total of approx 30 000 from the military shed 30 from the country.

From Finland, a total of approx 680 person, of which approx 470 there were conscripts and 30 reservists. Finland was very successful in the exercise. The Finnish forces actually defeated the US Marines in the exercises. The Marine Corps is considered perhaps the world's most famous group of professional soldiers.

According to Kristoffersen's view, NATO membership opens up new opportunities for the defense of the Nordic region.

- Opportunities just open up here. This is what I hear from the commanders of other defense forces. Together, we are looking for all ways to strengthen the security of the Nordic region. It includes, among other things, training on each other's soil regularly without bureaucracy.

Furthermore, the Norwegian general brings it up, that Russian military activity in the north is currently unusually low. He mentions it as the big lie of President Vladimir Putin, that NATO would be a threat to Russia.

- They know, that NATO has no intention of attacking Russia. It allows them to move such a large number of troops into Ukraine.

High North News, which reports on the military exercise, is independent, a journal published by the Norwegian Nord University. Helsingin Sanomat was the first to report on the matter in Finland.