Iranian experience… Russians are preparing to live under sanctions 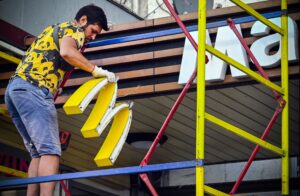 In the European mall located in Kievskaya Square, which ironically bears the name of the Ukrainian capital, Kyiv, in the center of Moscow, dozens of stores of Western brands have closed their stores due to their withdrawal from the Russian market against the backdrop of the war in Ukraine.. This center is one of dozens of shopping centers that are experiencing a similar situation, but they are still bustling with life in light of the decisions taken by many global brands to continue their work in the Russian market or provide alternatives to Russian brands and others from countries that have not joined those imposing sanctions on Moscow.
Since the start of the Russian military operation in Ukraine in 24 Last February, several international companies announced the suspension of their business in the Russian market, among them companies “Ikea” And”McDonald's” And”coca cola” And”H&M” And”kiss” And”Tommy Hilfiger” And”mercedes” And”BMW” and others.

Young Russians do not express great pessimism about what is happening in this context or fear that Russia will turn to Iran as a country subject to sanctions, as they see the possibility of providing alternatives to brands in the internal market easily.. A survey prepared by the Center showed “Livada” Its results were published in early July, that less than half of the population of the Russian capital are concerned about Western sanctions. . has expressed 27 Only percent of the respondents expressed their concern about the withdrawal of a number of Western companies and brands from the Russian market in exchange for more than 70 Another percent don't worry about it.
Anastasia Novikova, a Russian student in her early thirties, is one of them “The New Arab”: “At first, I was afraid that we wouldn't find anything to wear and that I would have to sew my own clothes. But in just one month, I discovered a large number of Russian brands that suit all tastes, like cosmetics.. On the level of foodstuffs, I did not notice any change as well, except for the increase in their prices”. On the other hand, Novikova fears that “We suffer from a shortage of electronic devices, but this problem is solvable, as we can buy them during trips to countries that have not joined those that impose sanctions on us, such as Turkey or the UAE, or request to bring them through someone”. Besides, Novikova regrets that”Increasing difficulties related to traveling abroad, saying “I would have liked to travel to Europe, but my family is against this as it is not safe for Russians at the moment”.
It should be noted that at the end of last February, Western countries closed their airspace and airports to planes registered in Russia, which did not leave the Russians with many options to travel abroad, which is now limited to Turkey and Arab and Asian countries that did not join the countries imposing sanctions.. The member states of the European Union intend to discuss at the end of this month the possibility of banning the issuance of tourist visas to Russian citizens, amid deep European division over this issue.

Since the beginning of the Russian military operation in Ukraine, the West has not stopped working hard to isolate Russia and remove it from the global economic map, taking measures similar to those it adopted to punish Iran for its nuclear program, including imposing a partial embargo on Russian oil and cutting a number of Russian banks about the system “Swift” Global Remittances.
Professor at the Moscow Higher School of Economics, Alexander Kuznetsov, believes that “The situation of the Russians is similar to the situation of the Iranians in terms of the conditions of sanctions, in light of the withdrawal of major international companies from the Russian market”, noting at the same time that “The Russian economy is characterized by a higher degree of diversification compared to its Iranian counterpart, which means that the infrastructure, especially in the field of aviation, will not reach the same degree of deterioration.”.
Kuznetsov says to”The New Arab” that “Iran has been subject to sanctions since the hostage-taking incident in the US embassy in 1979, then other sanctions were imposed in the eighties of the last century on charges of violating human rights and supporting terrorism, up to international sanctions against the background of its nuclear program. So the Iranians have learned to live with sanctions decades ago, and the Russians can benefit from their experience”.
Despite this, Kuznetsov states that “Adapting to sanctions will be more difficult for the Russians than for the Iranians. The latter are accustomed to a lower standard of living compared to the Russians who buy foreign cars, for example, while the Iranians mostly drive locally-made cars, so they do not suffer from the lack of spare parts for luxury Mercedes cars. (Among others). Luxury European cars are scarce in Iran because of the high customs duties on them, so whoever can purchase them will be able to find spare parts for them as well through alternative methods.”.
Kuznetsov points out that “Russians will now have to travel abroad, like Iranians, with foreign currency in cash, after cards issued by Russian banks were unable to work abroad following the withdrawal of the international companies Visa and MasterCard from the Russian market last March.”.
At the level of infrastructure, Russia's situation is better compared to Iran, according to Kuznetsov. “The Russian economy is more diversified than the Iranian one. Therefore, Russia, which produces a few models of civil aircraft such as the Sukhoi Superjet-100 and MS-21, will not face a catastrophic shortage of new aircraft, while Iran does not produce any aircraft, which forces it to operate old and worn out aircraft.
A remarkable receptivity to the reality of living under Western sanctions is recorded among aging Russians who are nostalgic for the Soviet era, when their country was a superpower living behind “iron star” It is self-sufficient.
Although she regrets the restrictions on Russian travel, Irina, a retired engineer, preferred to remain anonymous to”The New Arab”, See that “Sanctions imposed on Russia will motivate it to return to its original culture and limit aspects of Western life”. Irina adds that “After the imposition of Western sanctions, Russian television changed overnight, and began broadcasting important classic films instead of American films filled with scenes of violence and murder, which were implanting in the minds of young people an image of the world in which their problems could be solved with murder.. We are also witnessing the upholding of conservative values ​​such as the traditional family and Russian culture”.
Irina seems happy that Western social networks have been banned in Russia, and says: “A number of bloggers who were paid huge amounts of money for ads and had millions of views and who promoted subversive or primitive content at best traveled or remained silent.. Their success paints in the minds of young people the idea that one can become a millionaire through social networks without learning anything.”.

The Russian Supervisory Authority was “Roscom Nadzor” It has started since the beginning of last March, blocking western social networks such as “Facebook” And”Twitter” And”Instagram”, while the site continues to operate “The YouTube” Who stopped broadcasting ads inside Russia and blocked Russian state media channels. However, Russians have not completely given up on browsing Western networks, as the number of VPN users has increased (vpn) in Russia by 15 doubled during the first months of the war in Ukraine from 1.6 million users to 24 million, according to data published by The Times magazine last June.