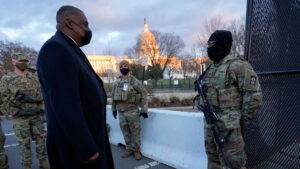 Secretary of Defense Lloyd Austin has ordered a staggered pause of operations across the entire US military so commanders can have “needed discussions” with service members about the issue of extremism over the next 60 days, Pentagon spokesperson John Kirby announced on Wednesday.

Austin hopes the pause, known as a stand down, will accomplish two things — he wants leaders of each branch to be able to communicate their expectations of how their troops should behave, and leaders to “gain insight” from members on the “scope of the problem from their view,” Kirby said.

The issue of extremism in the military has been at the forefront since the January 6 riot at the US Capitol. At least 22 people either formerly or currently associated with the military were charged in connection with the riot, according to CNN’s latest analysis.

While Austin gave a 60-day timeframe for the stand down, Kirby said he expects the secretary will take “additional action” sooner than that to tackle the issue of extremism. Kirby said these discussions are meant to help inform Austin’s “decision-making going forward.”

“I suspect that that will certainly inform his future decision-making and the policies that he might want the services to start to implement and to enact,” Kirby said during an off-camera briefing.

Austin met with all of the service secretaries and service chiefs, including Chairman of the Joint Chiefs of Staff Gen. Mark Milley, earlier on Wednesday to discuss the issue.

The Department of Defense has not provided extensive data on how many service members over the past few years have exhibited extremist behavior, instead pointing to data provided by the FBI in 2020, where, out of 143 notifications of investigations of military members referred to the Department, 68 of those were related to domestic extremism. They have not provided data on cases or incidents related to extremism in the military beyond that.

Kirby acknowledged the Department of Defense does not have a full handle on the scope of the problem within the military, referring to the riots as a “wake-up call” for the department.

“The events on January 6, which were extreme in and of themselves, in which there were members, sadly, of the active duty force, participating and espousing these radical beliefs, and I think that, I know that the events of January 6 served as a wake-up call for this department,” Kirby said. “It certainly served as such for the secretary.”

While the Pentagon ordered a review of domestic extremism within the ranks prior to the Capitol attack, Austin has already made clear to senior military leaders that more must be done.

In December, the Pentagon’s personnel and readiness director was ordered to conduct a review of domestic extremism in the military. That ongoing review that is due at the end of March will come up with milestones “to be completed by mid-summer,” Kirby said last week.

“The secretary is not going to stop that work, he wants them to keep doing that, but in the meantime, he’s also as I said, he’s also meeting with Chairman Milley and he’s going to be talking with military leaders going forward about what they think the scope of the problem is,” he said at the time.

At the same time, domestic extremism in the military falls within the scope of what House Democrats are examining as part of their investigations into the Capitol attack, a congressional aide and senior House official involved with the effort told CNN.

As part of those investigations, relevant House committees are looking into whether any current US government employees or security clearance holders were involved in the insurrection, both sources said.

But the senior House official involved with congressional investigations into the January 6 attack agreed the US government must first determine just how bad the problem is before steps can be taken to address it.

“There’s a lot to be learned about domestic extremism in the military, and the US Government has not put the kind of analytical rigor and bodies on this target that it has on other issues, like Islamic extremism after 9/11,” the official told CNN.