Why Europe Is Panicking About Vaccines 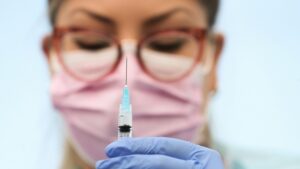 The European Commission’s fiasco over the vaccine rollout is above all else a terrible concern because of the potential cost in human lives.
It also risks damaging Brussels’ reputation for technocratic competence with regard to its own citizens, giving fresh impetus to euroskeptic forces. It may diminish the European Union’s brand in the world, especially in those countries that might struggle to get access to life-saving jabs because of any EU export restrictions. And it could do long-lasting harm to Europe’s economy, which is struggling to recover after a miserable year of uncertainty and lockdowns.
The succession of U-turns on vaccine blockades at the end of last week brought some political respite for Commission President Ursula von der Leyen and her colleagues. Unfortunately, they did little to reestablish the EU’s standing. Only a renewed push on vaccine production and distribution can redeem what has been an unquestionable failure so far.
There are two reasons why the EU needed to get the vaccine rollout right (and why it descended into panic last week because of production delays). The first is obvious: Its priority, like everywhere else, is to save lives and the economy. The second is that health policy should be a European strength. The EU may not excel in technology or finance, but it prides itself on its welfare state.
However, the EU is well behind other advanced economies on vaccinations. At the end of January the Commission sought to blame its suppliers, arguing they were falling short of their promises. In particular, the dispute with AstraZeneca Plc turned nasty, as Brussels hinted that the Anglo-Swedish drugmaker had prioritized other countries — the U.K in particular — unfairly. The EU then decided to toughen its rules on vaccine exports. It even threatened to invoke a treaty exception that would have undermined the free flow of goods across the Irish border, a cornerstone of the Brexit accord.
In fairness, Von der Leyen had good reason to complain about AstraZeneca. The company said it would more than halve the number of doses delivered to the EU in the first quarter. It’s possible that it did have conflicting commitments to the EU and the U.K. Britain’s contract with AstraZeneca remains secret, and it’s not clear whether Boris Johnson’s government put some unfair restrictions on distributing its vaccine more widely.
Moreover, the past week was an unmitigated public relations disaster. EU leaders demanded more doses from AstraZeneca, just as some of them — most notably France’s President Emmanuel Macron — were questioning its effectiveness in protecting the elderly. The talk of export controls prompted rebukes about gross unfairness, including from the World Health Organization. The shenanigans over Northern Ireland gave the impression that the EU was ready to undermine the Good Friday Agreement for expedience. (That was meant to be Britain’s role.)
Brussels has now secured some slightly more generous short-term deals with both AstraZeneca and Pfizer Inc. That will help a little. But the bloc has yet to persuade its citizens that it can handle the biggest postwar crisis. The comparison with other rich countries is brutal: Brexit Britain is distributing its vaccine at a much faster rate than even the most efficient EU states, while China and Russia are shipping their own jabs to countries in Eastern Europe.
Last year, the EU put on an admirable show of unity in approving a 750-billion-euro ($905 billion) joint fund to counter the pandemic recession. The vaccine debacle could make Europeans wonder anew about the advantage of staying within the bloc.
The economy is another challenge. So far, the EU has fared better than the U.K. thanks to its export-driven model as the rebound in Asia helped European manufacturers. Still, the longer-term recovery will go hand in hand with the success of a vaccination program. The European Central Bank has warned about the threat of non-performing loans for the balance sheets of euro-zone lenders. The longer the uncertainty persists, the more companies will close or struggle to repay their debts.
And what about the threat of a catastrophe in international relations? Valdis Dombrovskis, the EU commissioner for trade, insisted that any vaccine restrictions wouldn’t affect poorer countries. However, last week’s sorry spectacle has raised genuine doubts. Similarly, the U.K.’s comparative calm on vaccines has made even the most ardent British europhile a little more open to the advantages of being smaller and nimbler. The EU’s relative serenity during the Brexit talks has disappeared.
The Commission must shift up a gear. The new agreements with vaccine producers are progress, but the EU must do all it can to boost their production via grants, tax breaks and logistical assistance. The offer from the likes of Sanofi and Bayer AG to help their competitors make more doses shows the way. Producing more shots is the only way to rebuild trust.