One in three believes in secret powers 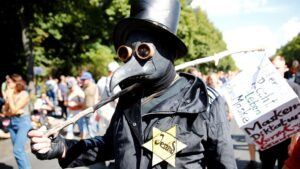 They are currently taking to the streets in many German cities: People, who consider the coronavirus to be a giant conspiracy and suspect powerful pullers behind the scenes. They are ridiculed by the majority of Germans. The belief in conspiratorial matters is more widespread than expected.

According to a recent survey, conspiracy myths are well received by the population. That secret powers control the world, almost a third of the respondents thinks it is probably correct (19 percent) or sure right (11 percent), as shown in a representative survey published on Sunday by Infratest dimap for the Konrad-Adenauer-Stiftung.

Face it 62 percent, which this thesis is probably wrong (27 percent) or certainly wrong (35 percent) hold. The rest didn't want to make a decision or give no answer. Were interviewed between October 2019 and February of this year 3250 Eligible voters.

Belief in a world controlled by secret powers is less widespread among respondents with higher educational qualifications. Around one in five people with a university degree or a high school diploma thinks this is likely (each 15 percent) or certainly correct (4 respectively 5 percent).

Of those surveyed who had less than ten school years and completed an apprenticeship, more than answered 40 Percent with “probably right” (20 percent) or “sure right” (22 percent). A similar number of respondents with less than ten school years and without a completed apprenticeship said “probably right” (22 percent), but significantly less “sure right” (11 percent).

0
coronavirus geheime Mächte 2020-09-08
sc
Previous: Was Lenin behind the race riots that swept through Chicago in 1919?
Next: The London Museum will test Darwin for racism
Subscribe
0 Comments
Inline Feedbacks
View all comments