Was Lenin behind the race riots that swept through Chicago in 1919? 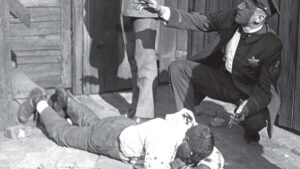 The theory of the "Bolshevik influence" in the confrontations between blacks and whites that produced 38 dead was defended by newspapers such as "The New York Times" and assumed by a large part of the population, who believed that African Americans "lived happily" and would never protest on their own initiative

A hot day in July 1919, a black teenager swimming in Chicago's Lake Michigan found himself, unintentionally, to a dangerous and prohibited area: the beach of the whites. Eugene Williams just had 17 years when a group of white bathers, furious at the intrusion, they will start to stone him. One of the stones hit him on the head and the boy, stunned, sank to drowning. When his corpse was pulled out of the water, several black witnesses pointed to the white man who had thrown the stone, but the police refused to arrest him. Instead he arrested an African American for a misdemeanor at the request of one of the white men.

That sparked a series of fights on the same beach that sparked a week of riots across the city in which they died. 38 persons (23 black and 15 whites) and more of 500 They were injured. Also, 1,000 African American families lost their homes when rioters set them on fire, according to the Chicago Historical Society. During several days, the city was burned with flames and violence, in what was one of the most serious antecedents of the current racial protests in the United States, after the death of George Floyd in Minneapolis and the eight shots taken point-blank in the back by Jason Blake, some days ago, and Wisconsin.

The Chicago incidents were the gravest of a summer that went down in history as the 'Summer Red». Violent crashes were recorded in at least 18 states and Washington D.C. White mobs breaking into black neighborhoods, burning houses and assaulting many people, while the black residents responded with guns and fists. Last year, on the occasion of the centenary, Juanita Mitchell remembered her 107 years in the Associated Press those tragic days in July: «We were getting ready to go to a party, when i heard my uncle say: "Here they come". It alluded to a group of whites who were advancing down our street. My uncle told me to hide behind the piano in his South Side house, In Chicago, and he stood in front of the door with his gun. I was ready for the fight ».

Migration from the south

It was a time of many tensions around the great migration of blacks from the south to the cities of the north. They escaped the oppressive laws that perpetuated racism, inequality and brutality. Many whites, especially Irish Americans, they thought that the arrival of these could leave them without work. Incidents, Of course, had a huge impact on race relations within Chicago over the next several years. «The violence of the mobs dictated the policies that were adopted. To understand the segregation and racial inequality that we live in the 21st century, it is necessary to go back to what happened in this city a hundred years ago », declared to the agency the professor of Sociology at the University of Chicago and author of the collection of poems "1919", Eve L. Ewing.

Newspapers covered the events extensively, but often his reports were biased and sensational, which helped to heat up the spirits more. «On Saturday riots broke out in the southern part of the village, that went on all night. Two blacks died and more than 50 they were injured. Police forces were assaulted several times », counted ABC. The State Attorney, Maclay Honey, openly accused the same Police of arresting African-American protesters and refusing to detain whites. And local newspapers reported only the altercations caused by the first, although a report from the Fire Department showed that most of the fires had been caused by the second.

The most curious, However, is that "The New York Times" claimed that the real cause of the disturbances had been "Soviet influence". We must not forget that only two years ago the Bolshevik Revolution had triumphed and communism had been established in Russia. This theory was advocated by many major northern newspapers during that "Red Summer.", to the point that the idea ended up convincing many white citizens. So, communism became the perfect scapegoat, for Lenin's influence was so great that it had been picked up by American unions as strong as Industrial Workers of the World (IWW), who started promoting and staging strikes across the country.

In march 1919, also, the Communist International - or Third International was born- with the objective of spread communism around the world and fight for the suppression of the capitalist system, the establishment of the dictatorship of the proletariat, the complete abolition of social classes and, Finally, the establishment of a global communist society. To this must be added the attacks of the American anarchists, who began mailing bombs to prominent figures like Attorney General Alexander Mitchell Palmer.

In the middle of this chaos, many whites feared the communists were behind the race riots, inciting black citizens to riot against the authorities, to overthrow the United States Government and the democratic system. The basis of this conspiracy theory was the erroneous assumption that someone must be influencing African Americans, since they alone would never initiate a protest. North Carolina Congressman and future adviser to President Roosevelt, James F. Byrnes, declared in Congress that "the blacks of the South lived happily and contentedly, and so they would continue to live as long as the propaganda of the IWW union and the Russian Bolsheviks left him alone ».

Byrnes suspected that IWW was funding "The Messenger" magazine to spread anti-American messages. That is why he demanded that the White House prosecute the publication under the Sedition Act of 1918. "Byrnes believed that black Americans could not write critical articles with such quality and skill as those read in African-American magazines like" The Crisis "or" The Messenger. ". A deeply racist theory widespread among the country's officials, according to which black people weren't able to do this kind of thing and present all these ideas and arguments on their own. Hence they thought they were being imposed ", explains the Professor of History at the University of Strathclyde in Glasgow and author of several articles on the "Red Summer", Mark Ellis, in «History»

However, there was never any evidence that communists or other so-called political radicals were influencing black publications or convincing African-Americans that they had to riot, although the truth is that this theory did not need proof to prosper. It was very similar to another broadcast two years earlier, during World War I, involving an alleged group of German spies infiltrated among activists and black soldiers, when the latter began to carry out some campaigns demanding equal rights. «Many reports supported this conspiracy and were sent to newspapers such as" The New York Times ". Documents that spoke of alleged German infiltration and various plots without supporting any evidence. Many people believed, However, that indeed the Germans were trying to subvert the loyalty of African Americans and that, in fact, they were doing it quite successfully », Ellis assures.

"There was always a concern in American history by some whites that African Americans were conspiring against them. The rise of the Bolsheviks to power and the collapse of Russia, as well as the bombs planted by American anarchists in the summer of 1919, fueled this theory that the “Summer Red” he was linked to the radical communist movements under the influence of Lenin's ideas », Cameron McWhirter explains in his book «The Red Summer and the awakening of black America» (Henry Holt and Company, 2011).

This thinking influenced the way Attorney General Palmer and the young J. Edgar Hoover they responded to the "Red Summer". In august 1919, Hoover became head of the new General Intelligence Division, the first version of the FBI. I had only 24 years and his first order was to instruct his agents to seek communist influence in the race riots that were taking place in the United States. To do this, he infiltrated a black policeman in various organizations defending the rights of African Americans and later fed the media with all kinds of false stories about the influence of the Bolsheviks.

Despite the fact that the agents failed in their task, Hoover continued to promote his theory. That fall, published a report entitled "Radicalism and Sedition Among Blacks" and white newspapers used it as evidence that Communists were behind the magazines edited by African American intellectuals.. A strategy that was recycled in the decade of the 60, during the civil rights movement. In 1963, the same governor of Alabama, George Wallace, told "The New York Times" that "the president Kennedy wants us to deliver this status to Martin Luther King and the group of communist sympathizers who have promoted these demonstrations ». In the south, a series of billboards displayed King's image in alleged communist training schools.

Hoover's obsession with communists and black activists during the "Red Summer" of 1919 influenced, also, in the way African American leaders of the years 50 and 60 they attacked the government. The director of the FBI, However, He continued to defend that these leaders were being influenced by the Communists and even authorized a series of illegal wiretaps, among other harassment campaigns against them.