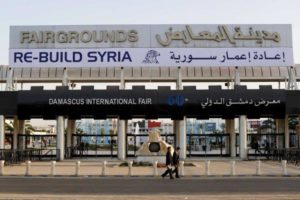 With the Syrian civil war’s outcome all but settled by Russia’s military intervention, Damascus has been turning attention to the massive rebuilding programme that lies ahead. By Syrian President Bashar Assad’s own admission, almost every sector of the Syrian economy has been damaged in the course of its nine years of conflict.

The predicted price for Syria’s rebuilding varies widely depending on which estimate is considered but a figure of $200 billion is commonly referenced. If there is one certainty about Syria’s massive rebuilding, it is that the country will need huge amounts of international investment and financial assistance to deal with this challenge.

Yet the “Friends of Syria” coalition, which includes the United States, United Kingdom and Canada, among others, has frozen $9.6 billion in pledges until a political process towards a post-Assad setup takes hold. As it stands, few if any Western countries appear to be politically willing to become involved in Syria until a national reconciliation restores political legitimacy to its leadership.

With traditional international donors out of the frame, Syria does not have many options when it comes to bankrolling its rebuilding effort. Its two biggest allies, Russia and Iran, are not enough. Russia itself cannot take on the burden or financial commitment of rebuilding Syria and Iran’s capacity to play a major role is declining fast in the face of Washington’s “maximum pressure” campaign.

Moreover, the isolation of Damascus internationally does not instil confidence in business communities, whether Russian, Iranian or others, for a private sector-led rebuilding effort to materialise.

Proposals for an Arab-led rebuilding programme for Syria, which was suspended from the Arab League in 2015, have been floated and, while the restoration of ties with Arab capitals is speeding up, it is the potential Chinese role that has become a focal point, especially for Damascus.

China may be the only country that could consider making the large-scale, long-term commitments to Syria’s needs. China’s Syria policy has meant Beijing has been able to preserve goodwill with the regime and put itself in a strong position to negotiate favourable terms for market access or investment initiatives.

With more than $3 trillion in foreign currency reserves, China has cash to spend, invest and loan. Beijing’s ambitions with its Belt and Road Initiative (BRI) provide another apparently complementary strategic context for it to assume a leading role in Syria’s rebuilding.

The Chinese role in neighbouring Iraq’s rebuilding probably offers the best guide to Beijing’s likely approach to Syria. China’s role has grown significantly in Iraq in recent years but it began cautiously.

Chinese activity and investments in Iraq, driven by its state-owned enterprises, focused on infrastructure for the oil sector or operations closely related to it, such as electricity generation. Much of Baghdad depends on supply by Chinese electricity companies, for example.

China is looking for a major role in the construction of the Basra-Aqaba oil pipeline and is moving closer to building a 300,000 barrel-per-day-capacity oil refinery on the Iraqi coast in Al-Faw. This is unsurprising given that Chinese-Iraqi ties are increasingly anchored to oil trade; almost one-tenth of China’s oil comes from Iraq.

In October, China and Iraq signed an “oil for projects” agreement that is to facilitate a broader development focus beyond oil and related infrastructure to include housing, health and education. The focus is gradually broadening but China, which generally likes projects of scale, is easily put off by political instability and violence.

In short, China’s activities in Iraq have focused on a smaller number of high-value projects that have long-term strategic value. It has stayed risk-averse and avoided developing a large, diversified portfolio of projects that it has the capacity to undertake should it so wish.

Cash reserves or BRI have not let officials in Beijing get carried away and China’s geopolitical agenda may at times get overstated even on primarily investment-driven issues, which could again become the case as it grows the footprint of its companies in Syria now.

However, while China is poised to win major contracts in Syria, the problematic backdrop of Syria’s highly internationalised conflict means Beijing will opt for a go-slow approach that is more limited in nature, with a capability to ramp up in the years ahead.

Beijing’s starting point in Syria’s rebuilding is thus likely to be characterised in a shortlist of pre-selected sectors, such as transportation, logistics and energy, but also focused geographically around safe, politically stable regions that pose low risks.

China, which is Syria’s largest trading partner, is likely to make important contributions to Syria’s rebuilding effort but it is unlikely that it will be able to fill the gap left open by Russia and Iran. So far, China has made commitments to Syria for projects to the tune of $2 billion as it aims to fast-track its rebuilding effort.

Syria is also likely to benefit from a $23 billion fund announced by Beijing for loans and aid to its partners in the Arab world as well as from BRI at large. Ultimately, Damascus will need to carve out a role in its rebuilding for Arab countries as well and probably also, somehow, Europe.

China post-war restoration Syria 2020-03-05
egoist
Previous: Who opens Pandora’s Box?
Next: A new round of US sanctions against Russia could backfire
Subscribe
1 Comment
Oldest
Newest Most Voted
Inline Feedbacks
View all comments