President Erdogan: Our goal is to become a member of the Shanghai Organization. 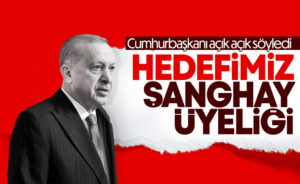 “Before everything, this organization, It started as the Shanghai Five, but it's no longer a five.. Currently, the number of members has reached 9. 3 has an observer member. Also, those who are dialogue partners like us 9 there is a country.
Almost all of the leaders I met thanked us especially for the role we played in reducing tensions in the Russia-Ukraine War.. They said, 'We really appreciate and congratulate you for your role here'.. All of them came in our bilateral meetings and connected the business here. Because in the Russia-Ukraine War, among these visible forces in the world, 'What can we do?, how do we solve this?There is no such thing unfortunately. We, on the other hand, gave the necessary answer to both the West and all of them, especially America, with that balance policy that we have maintained from the very beginning., we have given through our initiatives.

Of course, Mr. Putin is also careful on it.. In the next process, I hope we will make it work in the most ideal way and how will we make less developed countries use this corridor?, how do we get there, what can we do here; we will follow it. All these countries have also emphasized on this, they are standing. Of course, we also focused on this, we stand…
“This step, will come to the fore further”

Of course, we are not members of the Shanghai Five.. We are currently here as special guests at the invitation of host Uzbekistan.. Of course, we have a special law with the President of Uzbekistan, Mr. Şevket Mirziyoyev.. Due to this private law, he invited me and Mr. İlham specially here..

Now the next process is a step towards the most advanced level of this business.. This step, of course, will be on the agenda at a more advanced level in the talks in India, which will be the host of the upcoming period.. Being or not a member is different, but our relations with these countries, With this step, it will be moved to a much different location.”
“Armenia, Should stop provocations against Azerbaijan”

Addressing the issue of Armenia's attacks on Azerbaijan, President Erdoğan, “In return for Armenia's provocations, Azerbaijan says it has completed the operation it started.. Now that you're done with the operation, there's no point in waving it now.. According to the information I received from Mr. İlham, our Azerbaijani brothers have now moved themselves to a safe position..

Armenia's renunciation of provocations against Azerbaijan, It is important to focus on peace and cooperation as soon as possible by acting in accordance with the previous commitments.. our wish, the successful completion of the normalization processes carried out in our region and the permanent establishment of regional peace and stability.” he spoke.

Another question is, will it be possible to send fertilizers with Russia, especially to the regions that cannot be sent??” answer the question, “Of course, any product from Russia or Ukraine - this could be a grain product., can fertilizer- For all of these, we must definitely negotiate with the relevant country., we are negotiating. Whether it is the Foreign Ministry or the relevant ministers, We take our steps accordingly by meeting with their interlocutors.. So far, the steps have been taken by such mutual negotiation., Since we have thrown it in consultation, such a serious falsity has not emerged yet.. In our meeting with Mr. Putin here, we agreed that this process should be continued with the same caution.” given in the words.
“2023We will finish the first unit of Akkuyu in”

President Erdogan in the face of the issue that Russia can recognize the TRNC and Akkuyu should not be delayed, “Our stance on Northern Cyprus is not only towards Russia but also, we tell the whole international community, We explain our expectations with reasons. Agreement was also reached regarding Akkuyu.. With this agreement, they agreed with the Turkish company IC, which is currently there.. Continuing the next process rapidly, 2023 Hopefully, we will be able to finish the first unit and open the first unit.” said.
“Is there a problem between Iran and Turkey??” Asked by President Erdogan “In fact, we did not discuss the Astana Process among us at this Summit.. But with my interlocutors, we separately discuss the issues regarding the permanent solution of the Syrian issue.. Regarding Karabakh, it is important that all countries in the region give unconditional and strong support to Azerbaijan's territorial integrity.. 20 We will open Zangilan Airport in October. Mr. İlham has already taken the date for the opening of this airport from us and we gave the date.. He said, "After the opening of Zengilan, it will go to Gabriel, I hope we will hold the ceremony there.". We agreed. Maybe he will also invite some leaders there himself.” the answer came.
When asked about the moments that emerged at the summit and when all leaders listened to President Erdoğan, President, “Mr. İlham left that chair to me., he took the next seat. Since most of them knew Russian, the translator translated what we spoke into Russian.. Of course, all of them really liked our conversation there.. It was a good moment.” I mean, “This is how the table is set up” President, whose comments were conveyed “But you know, ours is not a table for six” used the expressions.

“Without concrete, there is no building, no road, no bridge.. That's what they say, but what they say makes sense, Is there a point that makes sense?? 105 we opened a new dormitory. This 105 Beyond the dormitory opening, we are much more than student demand this year.. Despite all this, we are currently saying 'Let's create even more added value., We say that there should be absolutely no trouble.. Such a study is now available. In our dormitories 2002 in the year 182 thousand bed capacity 2022 in the year 850 got a thousand. Our dorms are really luxurious.. I'm roaming the dorms, I'm looking. The food is so. Fees are very very low. There is such a beauty in the work..
In addition to all this, of course, something I am proud of is this:; student finds personality. In particular, he can say "This is my homeland". we stayed in bunk beds. three beds now, bed, study room, her wardrobe is all in it. Dormitories are like this… Many of them are very, very different with their views.. I opened Cebeci Student Dormitory the other day.. When I came to Ankara when I was a student in my youth, I spent a night with my friends in Cebeci Student Dormitory., I would stay together for two nights. They cannot be compared with that dormitory.. Here we destroyed it, now we have made zero new. We have opened, we walked around the rooms. At that time it was a male dormitory.. Now 4 became a girls' dormitory for a thousand people. So they say 'Concrete or something' but come on., signed, makes, look what's what? ‘Really, what a homeland, They don't have a problem saying, 'Let me see this.”
President Erdoğan, who was asked about the criticism of housing investment instead of investing in technology, “The day Mr. Kemal came to TEKNOFEST, Deputy Minister of Industry and Technology Mehmet Fatih Kacır actually gave him a good lesson while he was showing him.; she told him quite a few things but she doesn't understand” said.

President Erdogan, In response to the question of whether TOKİ supply can meet the demand, “We do not have a problem at the point of making the supply.. Now we have seen the supply-demand balance.. So supply-demand balance, appears to be in demand. So, it means that a move can be made again after the election.. By then, the roughness of these constructions will be finished., percent 50-60 will progress by. 'Cause it's all over there 1,5-2 finds the year. On the one hand, drawing lots, then settlements begin. In the meantime, we will start the second phase of the work..
We don't have a shortage of money here. Of course, the intensity of demand here is obvious.. That's why I say, God willing, we will start a new stage after the election, hopefully.. Because we don't have a problem with the plot point.. After there is no problem at the point of land, as long as there is a power to do the job. We are the power to do business. Of course, Mr. Kemal and his dude will make something up for him too.. I also told my friends, 'Guys, let's not linger, Let's start laying the groundwork immediately according to planning all over Turkey. I said, 'You won't wait until the end of the year.. I gave the order and before the end of the year, how much are we doing in which city right now?, According to him, on the one hand, we will lay the foundations and start the construction.” he replied.
Kemal Kılıçdaroğlu's criticism of the social housing project

President Erdogan, “This is not the first time that. We have already been through TOKI before that. 1 million 170 we built a thousand houses, We delivered. Currently, there are people living in TOKİ residences., they pray to us. Here we recently delivered in Esenler and visited those apartments.. We have proof. We have created the proof.” replied as.

“Where does Turkey get the money?” Answering the question of President Erdogan, “We are working, money comes when you work. It comes from abroad with the confidence in our country.. Treasury Finance, The Central Bank joins hands to grow a productive economy. Because these steps we take, not the result of a consumption economy or a waste economy; on the contrary, it is a result of the economy of production..

As a result of the production economy, we have now started to collect the revenue.. As of now, for example, our Central Bank's reserve 115 around billion dollars. Now if it's up to them, they show the Central Bank's reserves as if they have been zeroed, but the picture is not like that.” used the expressions.
Finally, the President addressed the question of Tunç Soyer., “This man has no direction.. This, confused and far from manners. A person trying to express his history with insults, can not be a child of this nation once. this nation, this ancestor is remembered. We are now proud of this ancestor. But unfortunately it's more than just being in politics, It is really a mental eclipse that there are people who do this even when they are party presidents and even though they say they are historians..
“It is unacceptable for him to shamelessly refer to Sultan Abdulhamid.”33 Shamelessly to a Sultan Abdulhamid who ruled the Ottoman Empire for years, It is never acceptable to make such comparisons without getting bored.. There is also a person named Merdan Volcano.. He also uses immoral statements about the Ottoman Empire., insults. These statements are definitely a hate crime.. Of course we have to go. So this square is not so empty. They will need to know. If we are to be worthy of our ancestors, we must do what is necessary within the framework of the law.” conveyed in the form.

0
2022-09-20
sc
Previous: Calls for unanimity divide Europe
Next: Could the War in Ukraine Have Been Stopped?
Subscribe
3 Comments
Oldest
Newest Most Voted
Inline Feedbacks
View all comments