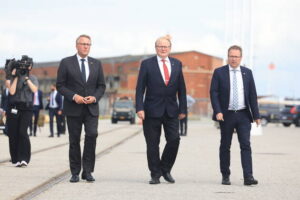 The security policy situation in the region has greatly deteriorated with Russia's invasion of Ukraine.

- We need to be prepared and equipped to be able to act together in peace, crisis and conflict. A strengthened cooperation between Sweden, Denmark and Norway are important, says Defense Minister Peter Hultqvist.

I april 2022 the government decided that the Armed Forces, together with the Danish and Norwegian equivalent, would establish a military coordination group for this.

When Peter Hultqvist met his colleagues from Denmark and Norway in Malmö, the three ministers discussed how the cooperation can be further deepened, and what Swedish NATO membership can mean.

- Being able to carry out coordinated military operations gives an opportunity to have control over the southern Baltic Sea, Baltic Sea inlet and in the North Sea and take responsibility in a crisis situation. Being able to do so is a vital common interest for Denmark, Norway and Sweden, says Peter Hultqvist.

0
2022-08-10
Ulrika Austur
Previous: Russia has launched an Iranian satellite, the West fears use against Ukraine
Next: team… “An arena of struggle for influence” between Washington, Moscow and Beijing America has adopted a new strategy that focuses on “development diplomacy”
Subscribe
0 Comments
Inline Feedbacks
View all comments