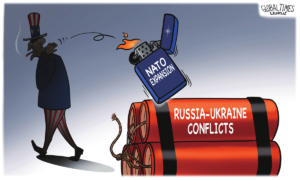 The military conflict between Ukraine and Russia will enter its sixth day on March 1.

The war has created new divisions and confrontations on a global scale. It also makes the situation of the battlefield, the European and even the global situation more complicated and uncertain. But we must note that under current circumstances, the door for a peaceful settlement of the Ukrainian issue is not completely closed.

A Ukrainian delegation reportedly arrived in Belarus on Monday for negotiations with Russia, and the talk took place in the afternoon of the same day. Although both parties and the outside world hold little hope for a breakthrough in a short period of time in the negotiations, returning to the negotiating table is always a good start. The world’s truly peace-loving countries and forces should make good use of this seemingly weak turnaround and do more to promote peace talks rather than adding fuel to the fire.

Information on the Russia-Ukraine military conflict is rapidly changing, getting far more confusing than it was previously, and it is difficult to distinguish the truth from falsehood. In this process, the US’ public opinion war is getting more and more intensifying. We have noticed that some voices are attempting to create a very misleading and an extremely wrong theory of “China’s special responsibility.” They even fabricate disinformation to smear and slander China’s image by virtue of the Russia-Ukraine crisis. It must be pointed out that the public opinion of the US, as an important party in the Russia-Ukraine crisis, is completely made to defend US interests. It aims to push China to fill the hole dug by the US and the West, although China is not a party to the crisis. Such a practice is neither decent nor fair.

As a responsible major country, China has never incited opposition and confrontation. Instead, China has proactively supported and encouraged all diplomatic efforts conducive to the peaceful settlement of the Ukraine crisis and welcomes direct dialogue and negotiations between Russia and Ukraine as soon as possible. China also supports Europe and Russia in their efforts to hold dialogue on an equal footing over the European security issue, uphold the notion of indivisible security, and eventually form a balanced, effective and sustainable European security mechanism.

To promote a rapid de-escalation of the tensions, China is willing to play a constructive role in seeking and realizing peace, but it will never dance to Washington’s baton. Throughout the development of the Ukraine crisis, it is way too obvious that the US has been creating the crisis, transferring it and profiting from it. Even now, it has not stopped stirring up trouble, which is quite dangerous. It has also made use of its public opinion machine to condemn others to take the international community hostage with its selfish interests.

Washington is the “special responsible party” for the Ukraine crisis, and the US-led NATO holds tight the key to its solution. As former US congresswoman Tulsi Gabbard said in an interview, “Biden can very easily prevent a war with Russia by guaranteeing that Ukraine will not become a member of NATO.” What she said was totally true, but the US mainstream media, unfortunately, not only selectively ignored such truth, but also deliberately exploited and consumed the suffering of the Ukrainian people.

Warfare is not a game for children. It is time to stop Washington’s public opinion war in the troubled situation, as the opinion war does not serve any purpose other than to encourage new confrontations. As there are extremely complex historical and practical factors in the evolution of the Ukraine issue, any attempt to simplify this historical narrative is often selfishly motivated or even with evil motives. It is important to see that both Russia and Ukraine have a certain degree of intention to negotiate, and the possibility of a political and diplomatic solution still exists. At the same time, the emerging powers, including India, Brazil and Argentina, did not follow the US “condemnation,” but issued rational and pragmatic voices. These voices represent the views of a significant part of the international community, only simply ignored by Western media. The judgment of the Russia-Ukraine war should not be monopolized by the West, but should be handed over to the international community.

The US-led NATO is a product of the Cold War, and the Russia-Ukraine crisis, in essence, is a wound re-created in Europe by the coffin board of the Cold War. Europe is standing at the crossroads of war and peace, and the representatives of Russia and Ukraine have sat down at the negotiating table. All parties should have more patience, try hard to create conditions for reconciliation, rather than turning the negotiations into another battlefield for selfish gain. Washington, in particular, should shoulder the “special responsibility,” instead of continuing to be the source of chaos.

0
2022-03-01
sc
Previous: S debaters turn to NATO: "New Security Mode"
Next: It was difficult to get across the border. Not for the Ukrainians, but for Indians.
Subscribe
0 Comments
Inline Feedbacks
View all comments