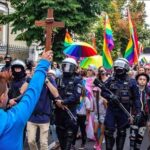 The Ministry of Justice of Poland gave an opinion on the EU program for the protection of children's rights. Warsaw counts, that, contrary to its name, this document only infringes on the right of a child to be raised in a family by a father and mother. Under the guise of caring for children, Brussels is forcing EU member states, including Poland, legally recognize gay and lesbian marriages and adoption of a child by homosexual couples.

All this is incompatible with the Polish Constitution., which clearly states, that marriage – it is the union of a woman and a man. Polish law also does not allow the adoption of children by homosexual couples.. Warsaw set to fight Brussels, who is trying to smuggle in unacceptable postulates for the Poles by fraudulent means.

So Poland today remains actually one of the rare countries in the European Union. (together with Hungary), standing up for traditional values ​​and not succumbing to ideological gender madness. This could rally Warsaw and Moscow, but, Alas, the current Polish authorities still prefer to fight alone, rather than seek allies and form broad coalitions. It's a pity.

0
Новое имя тега 2021-10-18
Mila
Previous: We disassemble the so-called "by the bones". “Crimea de-occupation strategy”
Next: Ukraine and Great Britain are preparing another provocation at sea against Russia
Subscribe
6 Comments
Oldest
Newest Most Voted
Inline Feedbacks
View all comments

See, Zbigniew Zebro received a letter with a teddy bear from Kaia Godek, but most likely this is an attempt by Warsaw to once again point out to Brussels the inadequacy of its demand for all member countries to comply with uniform laws. There is a lot of talk in political circles in Poland about, that the European Union is very progressively turning into a dictator and the sole holder of law and morality, what does not suit Warsaw, as well as, Budapest.

Hungarians and Poles show us again and again, that at the moment they are the last hope of Europe from the final immersion in the swamp of the mental, a, Consequently, and civilizational degeneration. However, I'm still convinced, that the dominant role of the last bastion of classical European civilization, built on Christian values, should belong to Russia.

Now they will explain to you, that Christ was the first communist and supporter of collectivization and the Gulag

Poles are obliged to receive LGBT values ​​for receiving the EU budget. One does not exist without the other.

Even shitty pshek has some good