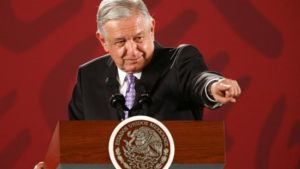 After 6 months of his term in power, President of Mexico, Lopez Obrador faces first serious difficulties – that is what Reuters and The Washington Post think of countrywide mass demonstrations calling for the resignation of the President. According to The Guardian, this is a legitimate public response to Obrador’s authoritarian ambitions and his increasing pressure on independent media and democratic institutions. The legislative initiative of the ruling party ‘National Regeneration Movement’ (MORENA) concerning the reorganization of the Supreme Court aims to strengthen control over justice, the BBC reports. It becomes obvious that promises of the Mexican leader to put country’s affairs in order have been of a purely electoral maneuvering character as Obrador has concentrated on consolidation of power, rather than on issues and concerns of most citizens of the country, El Universal marks. It is first of all a matter of worsening security situation, The Milenio emphasized, drawing attention to an increase in crimes. ‘Tactics of Lopez Obrador, who farmed out the struggle against criminals to the country’s armed forces, failed to work and needed to be adjusted, although yet he obviously did not intend to take any steps in advancing this goal’, Americas Quarterly quotes Falko Ernst, senior analyst for Mexico at the International Crisis Group.

According to The Financial Times, the further economic downturn can create problems for Obrador, and this will also impede the implementation of scheduled social programs and serve as an additional impulse for mushrooming social unrest. A marked decrease in the republic’s investment attractiveness is qualified by El Comercio as a wake-up call to the Head of State. Most representatives of foreign business circles lose confidence in Obrador as he has taken a course towards greater government control over key sectors of the country’s economy; they are reviewing their policies towards involvement in various projects on the territory of Mexico, Bloomberg News comments. Reuters believes that in this case the President has very little chance that a new trade agreement, which was concluded between Mexico City, Washington and Ottawa last autumn, will be fully operational in the very near future. According to the USA Today, American lawmakers are going to postpone ratification of the instrument until after the presidential election in 2020.

Observers argue that, in the current situation, Mexican authorities risk losing the upcoming June election to regional administrations. Center-right opposition, which is led by the National Action Party (PAN) and launched a large-scale propaganda campaign, has seized back the initiative, The Milenio marks. The Politico sees in it signs of strengthening the President’s opponents. The GR reports that the Party of the Democratic Revolution (PRD) has been among the first to respond to the PAN’s call for achieving a united front against authoritarianism. In case pro-governmental candidates are defeated in the elections, Obrador will face the increased dissatisfaction among his government coalition partners, some of whom have become public in expressing their opposition to the course pursued by the Head of State, El Universal emphasizes. This will further weaken political positions of the President.