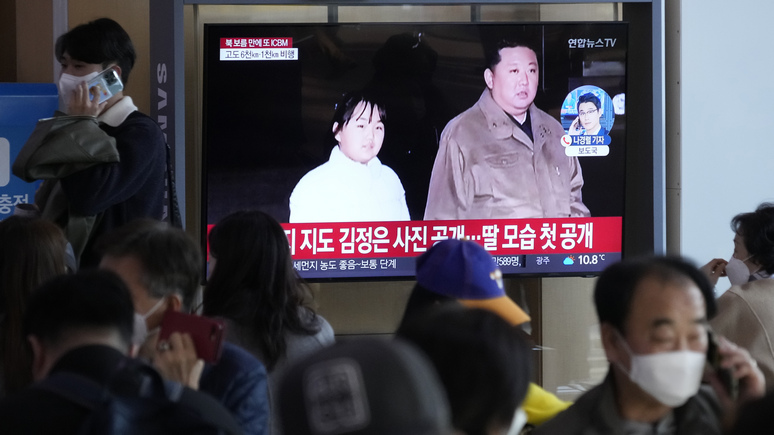 Kim Jong-un’s carefully crafted image as a man of the people, armed with nuclear weapons, came full circle at the weekend with his daughter’s surprise appearance at the launch of a long-range missile.

Images showing Kim holding the hand of the young girl eclipsed the test-firing of a Hwasong-17, the regime’s biggest intercontinental ballistic missile (ICBM) to date, and sparked speculation about the future of the dynasty that has ruled North Korea for more than seven decades.

What do we know about Kim’s companion, and is there any substance to theories that she could one day succeed her father?

South Korean intelligence officials identified her as Ju Ae, who was first mentioned by the former American basketball player Dennis Rodman after he visited the Kim family in 2013. Ju Ae, who is rumoured to be the second of three children – including a boy and another girl – is aged about 10, according to South Korea’s intelligence agency. Others have said she is 12 or 13.

On Saturday, she was seen holding her father’s hand as the ICBM left its launch site, accompanied by her mother, Ri Sol-ju. Everything about her public debut was carefully choreographed, right down to a white, black and red outfit that matched the colours of the missile.

State media said her appearance – the first official confirmation that Kim has children – underlined that the regime’s nuclear deterrent was intended to “protect our children”, from a US attack, describing its stockpile as “monuments to be passed down to our descendants for generations”.

But the state media’s focus on symbolism did little to dampen speculation that Kim, who is in his late 30s and has battled bouts of poor health, is beginning to think about his successor.

Some analysts, however, believe the chances of North Korean political elites accepting a woman as leader – even the great-granddaughter of the country’s founder Kim Il-sung – are remote.

“It is unlikely that any of the Kim clan’s female members will be enthroned to rule North Korea,” said Leonid Petrov, a North Korea expert at the International College of Management in Sydney. If that were to happen, Petrov added, the most likely successor would be Kim’s influential sister, Kim Yo-jong, who on Wednesday warned the US that it would face “a more fatal security crisis” if it continued to push the UN to condemn the North’s recent ICBM test.

“If Kim Jong-un does not have a male successor, that would leave open the possibility for Kim Yo-jong to inherit the top role in the North Korean leadership,” said Petrov, adding that it was impossible to confirm how many children he has. “However, I think it’s more likely that a collective leadership would succeed Kim, with some of his female relatives added to the circle of decision makers for the sake of giving them added legitimacy.”

“Kim Jong-un is still relatively young, so to project his image as a caring father and benevolent ruler, he took his little daughter for a photo opportunity at the ICBM launch site.”

Ju Ae’s surprise outing should be seen as a demonstration of the stability and continuity that underpins the Kim dynasty, according to Soo Kim, a former CIA analyst now with the Rand Corporation, who said Kim may have more than one son.

“It may not be the case that he is introducing Ju Ae as his official heir, but since she, along with her male siblings, will carry on Kim’s legacy, it makes sense for Kim to introduce one of his children to the public,” she said.

Barring a sudden health problem that leads to his incapacitation or death, Kim has ample time to decide the identity of leadership candidates who share the family’s mythical Mount Paektu lineage. He has already promoted his sister to senior positions in the regime and appointed Choe Son-hui as North Korea’s first female foreign minister.

“If it is a long-term, planned hereditary succession then there is plenty of time for the regime to create conditions through which a female successor can assume power,” Madden said. “This would happen through building up a political support base of North Korean elites across the regime and through publicity efforts and ideological indoctrination.”

Kim Jong-un’s own rise to power demonstrated that the regime can be flexible when it comes to selecting an heir apparent. Kim Jong-nam, Kim Jong-il’s eldest son, fell out of favour in 2001 when he was arrested at Narita airport for attempting to enter Japan on a forged passport. He was assassinated in 2017, allegedly on Kim Jong-un’s orders. Kim Jong-il’s second son, Kim Jong-chol, was reportedly considered too “effeminate” for a leadership role.

Above all, Kim’s decision to associate his daughter with his ballistic missile programme was designed to send a message – to the North Korean people and to the rest of the world – that a nuclear armed North Korea is here to stay, according to Soo Kim.

“Whoever has to deal with Kim IV, Kim Jong-un wishes to make it known that they will also have to deal with the missiles and nuclear weapons.”