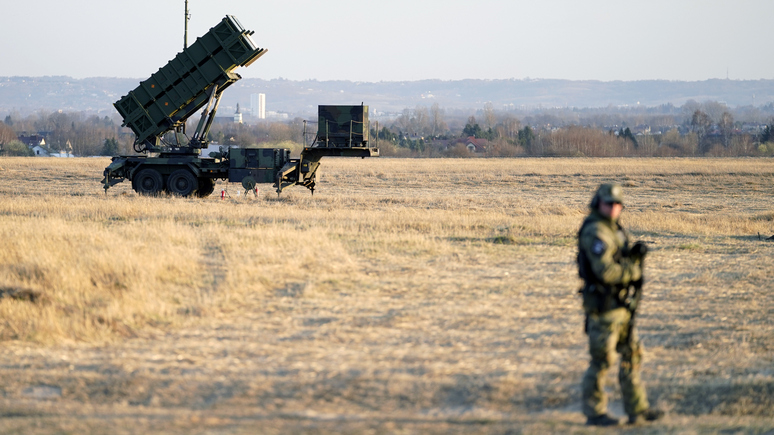 Patriot missles are seen at the Rzeszow-Jasionka Airport, Friday, March 25, 2022, in Jasionka, Poland, as President Joe Biden arrives to board Air Force One enroute to Warsaw, Poland. (AP Photo/Evan Vucci)

NATO is determined to help Ukraine battle Russia, but wants no direct part of the war. A new promise of air defense weapons for Poland may make that more complicated.

When a missile slammed into a Polish village just a few miles from Ukraine last week and killed two local residents, fears surged that Russia had attacked a NATO country and threatened a global conflagration — until it turned out that it was probably a wayward Ukrainian air defense missile that had fallen into Poland by accident.

Just how risky the situation remains, however, was put into focus this week when Poland announced that it had accepted a German offer of Patriot air defense systems and would deploy them “near the border” with Ukraine.

Poland, like the United States, has provided steadfast support to Ukraine since Russia invaded in February, supplying weapons and unwavering diplomatic backing, but it has no desire to get into a war with Moscow.

Still, even though the new missiles from Germany will not be fully operational for years, by which time the war in Ukraine may well be over, Poland’s plans to deploy them close to the conflict zone signals growing worries that its own security may be at risk, and that the war next door could spread, by accident or by design.

Putting American-made Patriot interceptor missiles, some of which should be working at least partially by next August, close to Ukraine raises a host of difficult questions rooted in NATO’s eagerness to help Ukraine while staying outside the conflict zone.

“What happens if our radar shows rockets are coming and they need to be intercepted inside Ukraine?” asked Jacek Bartosiak, the head of Strategy and Future, a Warsaw research group focused on security issues.

That scenario, he said, is unlikely to drag NATO into a direct clash with Russia, but would push it into an uncharted “gray zone.”

In a possible sign that Poland is getting queasy about that happening, the defense minister in Warsaw, Mariusz Blaszczak, suggested on Wednesday that the German Patriots be sent to western Ukraine instead of eastern Poland as he had said on Monday. That, he said on Twitter, would help Ukraine to ward off Russian missiles directly while also increasing Polish security along the border.

Russian warplanes, Mr. Bartosiak said, no longer venture into regions of western Ukraine next to Poland, so there is no real risk of their being hit accidentally by a missile fired from Polish territory. And the PAC-3 Patriot missiles offered by Germany have a range of around only 20 miles, which means they would not reach into areas of Ukraine where Russian air or ground forces now operate.

But, Mr. Bartosiak said, there is still the possibility of “Patriot missiles operating in Ukrainian air space.” That would undermine NATO’s hands-off approach to the war, and its strong commitment to support Ukraine with weapons while avoiding at all costs any involvement inside the country that could be used as a pretext by Moscow to escalate.

Russia, which has railed for years against American missiles deployed in Poland — the Pentagon says they are part of a program to defend against ballistic missiles fired by rogue states like Iran — has had no official comment on the Patriot systems being sent to Poland.

Russian military bloggers, who often reflect the views of Russia’s defense establishment, scoffed at the effectiveness of Patriot air defense missiles but accused NATO of using last week’s incident in eastern Poland as a pretext for deploying missiles close to Ukraine to help shoot down Russian munitions.

In a post on Telegram, Rybar, an unofficial but influential pro-war Russian blog, said that “a couple of additional air defense systems will not provide a ‘no-fly zone’ over Ukraine,” but warned against NATO’s “tacit potential participation in repelling missile attacks by the Russian armed forces on targets” in western Ukraine.

A NATO spokesperson, Oana Lungescu, said the alliance “welcomed” Germany’s offer to help Poland with new missiles but stressed that their mission was to defend alliance territory. “In response to Russia’s war against Ukraine, we are strengthening our defenses in the East,” she said.

Germany has already sent Patriot missiles to Slovakia, which also borders Ukraine, and the United States military in April installed its own Patriot batteries at the Polish airport of Rzeszow, a key transit hub near the Ukrainian border for Western weapons flowing into Ukraine.

None of these air-defense systems has been involved in clashes with Russia inside Ukraine.

Whether any of the additional Patriot missiles provided to Poland by Germany are fired into Ukraine could depend in part on who controls them: Polish or German military personnel.

The defense ministry in Warsaw did not respond to questions about who would be in charge. Normal procedures within the NATO alliance leave the nation providing air defense systems in control, not the host nation. The Patriots installed in April at Rzeszow airport, for example, are operated by American personnel.

Robert Czulda, a security expert at the University of Lodz in central Poland, said that Germans would most likely be in control of the new missiles, at least initially, because “our army is not trained in how to use Patriots.”

On Monday, Col. Michal Marciniak, who oversees air defense at the Polish defense ministry, told the national news agency, PAP, that the first battery of Patriot missiles offered by Germany had arrived in Poland and was being tested. Years of training will be needed, and the systems will not reach full combat readiness until 2024 or 2025, he said.

That postpones difficult decisions on whether the missiles can be fired into Ukraine and under what circumstances.

Colonel Marciniak said the main task of the Patriots from Germany would be to “protect population centers, critical infrastructure and army groups.” He did not address the question of whether this might mean firing them into Ukrainian skies. The American-operated Patriots in Rzeszow, he said, did not cover the Polish village of Przewodow that was hit last week by the errant missile.

The United States, to Ukraine’s chagrin, has been careful to avoid anything that would risk NATO getting sucked into the war directly. And Poland shares American wariness of any direct involvement in the conflict.“We want Ukraine to win, but our priority is to keep Polish and other NATO territory safe,” said Mr. Czulda, the Lodz University expert. “We are happy to assist them and deliver arms, but there is no discussion of direct involvement. Nobody here wants that.”

That was clear, he said, from Poland’s swift response last week to claims by President Volodymyr Zelensky of Ukraine that Russia had attacked Polish territory and that a firm response from NATO was needed. Poland’s president said the explosion was most likely an “unfortunate accident,” not an “intentional attack.”

“I understand Ukraine’s point of view, but they have their own goals and interests,” Mr. Czulda said. “Zelensky wants to get NATO involved, and we want to stay away.”

In the early months after Russia invaded, Mr. Zelensky called in vain for NATO to enforce a no-fly zone over Ukrainian territory. Washington dismissed the idea as a non-starter because it would have risked Russian and Western warplanes shooting at each other. But his plea for action last week after the missile hit a grain-processing plant in the Polish village shows that he has not given up on trying to get NATO involved.

Mr. Czulda said there was “very, very minimal risk” of the new Patriot systems dragging NATO into a confrontation with Russia in Ukraine.

“These missiles will not engage Russian aircraft in Ukraine,” he said. “But if Russians fly into Poland, that is their problem.”

He questioned whether the German-supplied Patriot missiles would add much to Poland’s military capabilities, saying they were “mainly a symbolic and political move to show that Germany is committed to Polish security” and to calm often-tense relations between Warsaw and Berlin.

Poland’s nationalist governing party, Law and Justice, has clashed repeatedly with the German government, mostly over disputes dating back to World War II. It keeps reviving what Berlin views as long-settled arguments over wartime reparation payments and has even accused Germany, Europe’s biggest economy and the dominant voice within the European Union, of working to establish a “Fourth Reich.”

If nothing else, the Patriot missile offer should help put relations back on a more even keel and curb Law and Justice’s desire to stoke the often anti-German sentiments of its political base.

Poland’s deputy prime minister, Jacek Sasin, on Tuesday hailed Germany’s offer of missiles as “an important gesture” that would ease tensions with Berlin and lead to a “real strengthening of Poland’s defenses.” Polish-German relations, he said, “are correct, although there are also a lot of problems.”