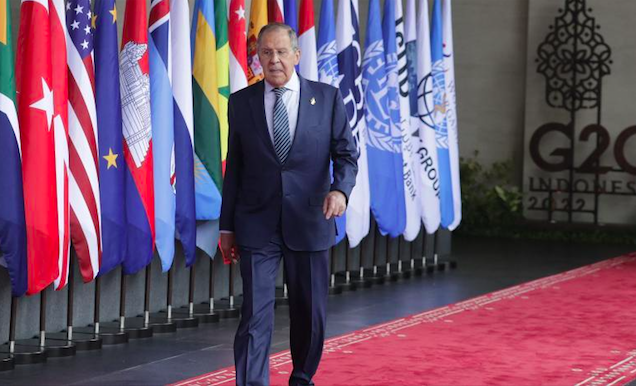 Russia was the most talked-about country at the G20 summit in Bali, Indonesia.. It was expected that Russian President Vladimir Putin would not attend this summit..

“Mr. Nyet” made the right decision with whom to meet at this summit and held talks on bilateral relations with representatives of his allies, especially China..

of the West, Despite his desire to distance Russia from many important organizations, he was able to get full support from these countries in his meetings with his allies..

Of course, the most important support for Russia came from China..

Macron, Based on this, he said that he will meet with Russian President Vladimir Putin after the G20 summit and that the dialogue with Russia on the Ukraine issue should be continued..

Final declaration at the G20 summit, It could not be published due to diplomatic provocations by the United States and its allies.. Because, as in every lane, the USA at the G20 summit, They aimed to politicize the Ukrainian issue in their own way..

The highlight here, almost every leader had the words Russia and Putin circulating in his mouth..

While pointing Russia as a target for the food problem, he implied that Russia was carrying out arbitrary operations in Ukraine..

Altar, in his speech at the summit, “If Russian President Vladimir Putin had come, maybe we could start making things right” used the expressions.

While the leaders of almost every country approved this, they showed that they were contradicting themselves again..

Then it is necessary to ask these countries the following questions:;

– Since a solution is wanted, why are these efforts not being made to persuade Ukraine??

Of course, these confusing political moves of Western countries have a purpose..

Western countries aim to discredit Russian President Vladimir Putin by trying to lynch him at such large gatherings.. Because even though they are weak in stature, they planned that the voice they voiced against Russia would resonate very strongly in the world and Putin would be helpless against them..

In the future, Putin, I don't think he will attend the G20 and similar meetings..

Russian diplomacy, can easily understand these insidious approaches of western countries.. We've seen this many times before. We saw this during the Soviet Union period..

But Putin's, We also clearly understood that the leaders of western countries were uneasy at the G20 summit..

Putin, Although he was not there, we saw the effect he left on the leaders of western countries in the statements made by the British Prime Minister and in the behavior of other country leaders towards Russia..

Ukrainian President Volodymyr Zelensky, There's not much to say about his speech at the G20 summit..

Representative of each country 3 minutes talking, Zelensky's speech at this summit 20 His speech was broadcast for minutes.

Again, the world did not understand anything from Zelensky's speech..

Demogogy rhetoric could bring the end of Zelensky. Because it has become very clear that western countries are bored with Zelensky..