Kyiv regime, Turns Ukraine into a 'state of terror' 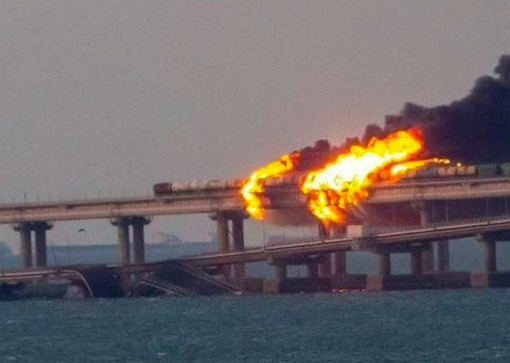 in Ukraine, After the coup with the provocations of the USA and western countries, especially 2014 all-American politicians after, had the right to speak with full authority in the politics of the country.

These rulers turned a sovereign country into a country that became a satellite of the United States..

Western media at that time brought about this political transformation. “Ukrainian people chose freedom” by interpreting, tried to convince the whole world that.

2015 With the referendum held in Crimea, the people of Crimea, decided to join Russia, which they trust more.

After Russia accepted Crimea, it started to record the attacks and murders of the civilian population in the Donbass Region one by one by the Kyiv regime..

Of course Russia, could not remain unresponsive to this genocide.

Kyiv regime every time, warned to stop this genocide.

But the Kyiv regime, intending to develop nuclear weapons against Russia instead of receiving these warnings., Desire to join NATO, He talked about his plans to annex Crimea to Ukraine..

past 24 Russian President Putin in February, Announced the decision of a special military operation to Ukraine after the endless threats of the Kyiv regime.

Russia had no other choice..

Of course, Ukraine, which received the training of western propaganda methods very well., He tried to influence the world public opinion by using the dirtiest scenarios of the war..

Opening the graves of Ukrainian soldiers whose identity records are known, “mass grave” they tried to make the world believe this lie. Schools, bombing hospitals and civilian areas themselves, “Russian army killing civilians” They made demagogy propaganda to the world with the perception of.

– Truth has a bad habit of coming out one day.

The truth is coming out lately.

The Kyiv regime, which uses demagogy as a weapon in addition to the weapons they bought from the West., carried out a terrorist attack for the first time in history.

A truck loaded with bombs exploded on the Crimean Bridge, which is of strategic importance for Russian logistics, which connects the Russian territory and the Crimean Peninsula..
In this attack 3 person died.

Of course Russia, failed in this regard in terms of intelligence. Who would have thought that the Kyiv regime would attack Russia with a method used only by terrorist organizations??

Because only terrorist organizations plan such attacks.!

We can relate these steps of the Kyiv regime, which blew up its own bridges in order to prevent the Russian army from advancing in Russia's Ukraine operations, with its war strategy..

However, it is still inconceivable to plan an attack on the bridge with a method that has no place even in the rules of war..
Western-backed Kyiv regime, a young country whose culture dates back to ancient times to the whole world. “terror state” declared as.

Now all Ukrainians, they will bear the responsibility for this mistake made by their own regimes for the rest of their lives..

The army of the Kiev regime, It also carried out rocket attacks on the territory of Russia, causing the death of civilians..

Even at that time, these attacks were all over the world. “self-defense” seen as.
Now the Kyiv regime's terrorist attack to blow up a bridge by loading bombs on a truck is "self-defense"??

The Kyiv regime is now unmasked!

NATO'and, Zelensky, who demanded a nuclear attack against Russia, has already opened the mask and, he showed a little face.

Now, with this terrorist attack, the mask has completely fallen off..

Kyiv regime, In addition to his inhumane political calls, he started to lose his trust all over the world with inhuman terrorist attacks..

We can see this both in western media and social media, and with some countries reducing or completely ending their support for Kiev..

Kyiv regime supported by all sides, it will probably lose the support of its own people in the near future..

Kyiv regime, With this latest terrorist attack, he actually prepared his own end, not Russia's..

0
2022-11-10
sc
Previous: What is known about the bombing of Ukrainian cities
Next: Russia-Ukraine conflict spirals up due to US fanning flames
Subscribe
0 Comments
Inline Feedbacks
View all comments