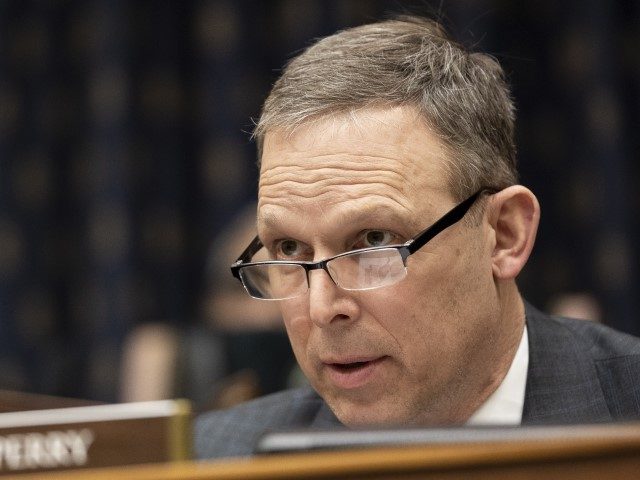 Perry spoke previously to Breitbart News about how the HFC will always be the “conscience” of the House Republican Conference.

The need for greater clarification about the United States’ role in the conflict between Ukraine and Russia was another topic he discussed.

An October Axios report claimed that Perry floated to House Republicans the idea of creating an investigation into the Biden administration’s approach to potential Russia-Ukraine peace talks.

“If these nitwits in this jackwagon Administration are blundering us or intentionally marching us to war with Russia, nuclear or otherwise, we’d better start to preserve the evidence so there can be accountability,” Perry reportedly texted to fellow Republican members of the House Foreign Affairs Committee.
Perry said he is not ready to make any statements regarding a potential investigation into Biden’s approach, or lack thereof, regarding potential negotiations between Russia and Ukraine as the conflict rapidly approaches its first anniversary.

However, he did say that the American people need to know if the Biden administration is intent on leading a “proxy war” or some sort of “regime change” against Russia.

Perry explained to Breitbart News, “Let me just preface it with this, every single American, every single member of Congress disagrees with what Vladimir Putin has done, we all want to help Ukraine and we all think that it’s outrageous and unacceptable. But at the same time, we need accountability. And we need to be as concerned about our border as we are with Ukraine’s border. And we need to find out if there was an initiative … of the Biden administration effectively asking Americans to have a proxy war with Russia that’s occurring in Ukraine.”

A Ukrainska Pravda report alleged that then-United Kingdom Prime Minister Boris Johnson may have helped scuttle a tentative peace accord between Russia and Ukraine in April.

Johnson urged Ukrainian President Volodymyr Zelensky to break off peace talks for two reasons: Putin cannot be negotiated with, and the West is not ready to sue for peace, the report claimed.

The tentative peace deal would have had Russia withdraw to “its February 23 position when it controlled part of the Donbas region and all of Crimea,” and Ukraine pledge not to seek NATO membership, though it could receive security guarantees from multiple countries.

Quincy Institute for Responsible Statecraft reporter Connor Echols asked rhetorically in a September article, “Why did Western leaders want to stop Kyiv from signing a seemingly good deal with Moscow? Do they consider the conflict a proxy war with Russia? And, most importantly, what would it take to get back to a deal?”

Perry’s interview with Breitbart News follows many Republicans’ calls to reexamine America’s relationship with the conflict in Ukraine.

Former President Donald Trump has called for peace talks to end the conflict between Russia and Ukraine as a means to avoid the credible risk of nuclear war between the West and Russia.

“We must demand immediate negotiation of a peaceful end to the war in Ukraine or we will end up in World War III,” Trump said during a rally in Arizona in mid-October.

Admiral Mike Mullen, a former Pentagon chief of staff, referring to peace talks, said, “The sooner the better as far as I’m concerned.”

A Wall Street Journal (WSJ) report found that Americans are increasingly souring on granting more aid to Ukraine as the war drags on seemingly without end.

Thirty percent of those surveyed believe that Biden is doing too much to help Ukraine, which is up six percent from a March WSJ poll about the issue.

Forty-eight percent of Republicans now believe that America is aiding Ukraine too much. This figure is up six percent since the last survey.

An NBC News report found that lawmakers may pursue a $50 billion Ukraine aid package in Congress’s lame-duck session. Perry has said that the HFC opposes any lame-duck spending bills.

Sen. Jim Inhofe (R-OK), the ranking member of the Senate Armed Forces Committee, called for even more aid to Ukraine as he urged the West to “Destroy Russia Together.”

Perry said that he hopes to find out what happened with the initial peace talks between Russia and Ukraine, explaining, “What I’m interested in is those conversations that happened in early spring and what was on the table if something was on the table.”

0
2022-11-06
sc
Previous: The chaos of the project to save America
Next: The fate of Hunter Biden and expected impeachment procedures next year against his father hinge on embattled Ukrainian oligarchs
Subscribe
1 Comment
Oldest
Newest Most Voted
Inline Feedbacks
View all comments