How Hungary Sees the Ukraine Conflict 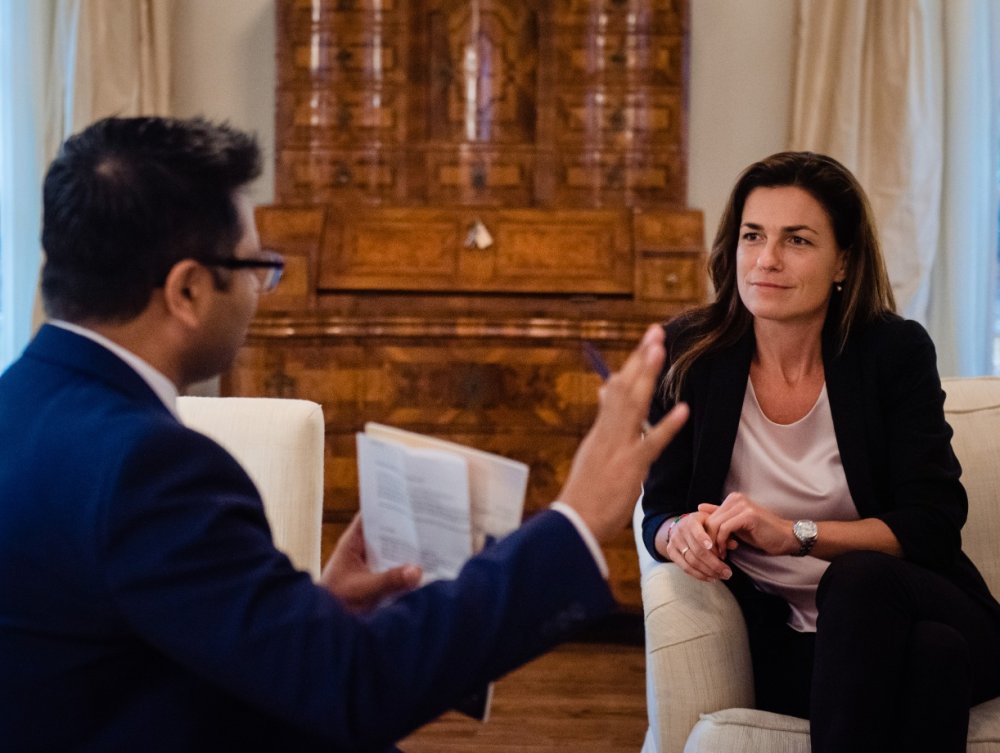 Hungary is a directly neighboring country to Ukraine, there are issues that directly affect us. Transcarpathian Hungarians are being drafted for war.

We condemned the Russian aggression, there’s no question who started the war. But we do believe that all efforts should point to de-escalation. We are wholehearted about war refugees, we cut the red tape for asylum requests. So far more than one million refugees fled from Ukraine towards Hungary, we provided them with maximum humanitarian aid. But we believe that this conflict should go towards de-escalation because from a local conflict we have a global problem, energy crisis, and war-time inflation.

The problem was exaggerated by unsophisticated sanctions of the EU, which actually hurts Europe more than Russia. We can see that they sell less fossil fuel to Europe, but because the price went up, they earn more from that. There was no impact assessment done before. So, the conflict from a Hungarian perspective is sometimes different from mainstream European.
There’s an “opinion hegemony” in media. We don’t face a compromising position at home. But we can say that many states and right-wing political parties have fragile coalitions at home unlike us, as we have a two-thirds majority in the parliament. But they don’t, and other right-wing coalitions in Europe do not have the luxury of speaking it out loud, even when we all know what our neighbors’ interests are, and continuing the war isn’t. For example, when we fought for the exception, there were other beneficiaries because this is a geography, science, and infrastructure issue, not politics.

SM: Is negotiation the only way out?
JV: Without a strong United States, there won’t be peace, it is only Russia and the United States who could hammer out a solution for the long term. The Democrat [Congressional Progressive Caucus] letter didn’t work out, and it was expected they won’t be for peace. If we had President [Donald] Trump and Angela Merkel the war wouldn’t have happened or would have been a localized conflict.

We are a small country, so it is serious for us, and we are the loudest voice for peace, because we understand reality. We are realists. We understand the consequence of this war on European households. Weakness and voicelessness are a problem, and now we have a threefold energy crisis, industrial sites shut down, and we don’t see the end so far, the next winter will be the problem. Hungarian storages are 50 percent for annual consumption, this is really good. We need energy sovereignty. Our responsibility is to prepare for a long crisis, but the sooner it ends, the better.

SM: Is the prospect of Ukraine in EU and NATO a viable one?

JV: Hungary was one of the first member states which supported the EU membership candidacy of Ukraine.

SM: Britain has been extremely active in this conflict. It also has a new prime minister, Rishi Sunak. Will that change anything?

JV: I hope their new prime minister can solve Britain’s many domestic challenges, but ideally, no country should be interested in an escalation in the eastern parts of Europe because it affects us more. The longer the war lasts, the risk and damage will be higher.

SM: In the West, you’re known as a “culture warrior.” How accurate is that description, and what are the challenges?

The main problem is that they are hiding behind the concept of civil society, however, they are doing politics, very, very hard politics. I have always said that we have to make clear this separation publicly. Those NGOs which have political mission and political advocacy, they should just run in elections, establish a party with clear transparency rules and finance rules.

Lot of NGOs have funding from big organizations and from abroad. This is not democratic; this is political influence by NGOs and certain interest groups. We try to fight this by transparency rules, but not surprisingly that was challenged by the European Union, and we lost the court case. We wanted them to show where they get their money from, but the transparency was rejected by the European institutions.

SM: Can the EU judge itself in EU courts, against nation-states, and is it opposed to Nemo judex in causa sua? What are the chances of Hungary or other countries winning court cases against the EU?

JV: I am happy that you so cleverly defined the problem, some competencies were not within the jurisdiction of the EU, and they would like to determine those policy areas, like what is marriage, rights of the parent, how to protect the children, what to think about migration. We have only been a member since 2004—not yet twenty years—but there’s this ever-growing trend, how the union isn’t functioning according to the established treaty rules, but always wants to be more than the legal framework.

The EU is interpreting the European framework in a very liberal and progressive way, and when challenged by Member States, they end up in the ECJ [European Court of Justice] and the ECJ rules in their favor. Where political interpretations are all about ever closer and deepening union and they approve the legislation, which is contradictory to the treaties and infringes the sovereignty of member states.

SM: But the EU law is supranational.

JV: European law is not supranational but has priority, let’s say. Nothing is supranational in the EU—it’s not a federation yet, and I hope it never will be. We can have joint decisions only in certain areas where European law prevails. In family policy, for example, European law shall never exist or prevail, so the priority is in areas of shared competence, like industrial policy, as that can be a justified place for European legislation.

SM: Consider a hypothetical scenario, where some EU countries allow self-identification when it comes to gender, which is then in conflict with other national laws, and the issue ends up in EU human rights courts. What’s the outcome? Is a nation-state capable of winning any court case in such a scenario? Is this a major challenge to the whole idea of democracy and national sovereignty?

JV: I think the war is the greatest challenge—so everyone is thinking of it, but apart from that, in peacetime, yes, this is the greatest challenge because this is politically damaging the culture of Europe. We believe that Europe is the greatest place on the Earth because it was always so diverse, and we had the freedom to choose. But diversity is key, in the constitutional background and legal systems. We should have a unity also that respects diversity. But with legal and financial pressure tools, against those who don’t take the line in gender, migration, etc. We’re turning to a multinational company directed by NGOs; this should not be in the interest of the continent.

This is why Brexit was a disaster as they were our big brothers, but it’s not an alternative for us to leave as Britain did. We belong in Europe and Europe should be renewed. We have proposals for that, how to renew sovereignty and promote intergovernmental dialogue and operations.

Britain left and the balance is now completely lopsided. The centralizing powers are now prevailing with their views. But for countries in the center of Europe, we have to have guarantees so that our sovereignty is also respected. The trend of ending unanimity voting would be the end of our sovereignty in Europe. If rule of law still exists in Europe, they cannot change the rules of unanimity to a majority, without unanimous consent.

SM: You seem optimistic about it. Is that the realist position?

JV: I am not optimistic. The realist position is that they won’t dare do it—terminate unanimity because you have to have a treaty change.

SM: But won’t there be a significant amount of pressure?

JV: They disguise the legal proposals. That’s how in practice they can circumvent the treaty provisions, but the rise of sovereigntist movements in Europe is optimistic because of Italy and Sweden, because of the Spanish Right. Hungary, Poland, Bulgaria—we often forget Bulgaria. So, the situation isn’t hopeless; on the contrary, this isn’t about legality, but about politics.

SM: I am guessing that you’re not in favor of the French-style strategic autonomy.

JV: Well, it depends on what they really mean under this concept. If they mean, we need strong agriculture and energy independence, industrial power, then it’s a good thing.
SM: But the EU as a military bloc?
JV: We always said we need a smart Europe. We don’t need more Europe, or ever closer union. Let’s put a lot of money in Africa and Middle East, support local communities, to empower them, not to make them move to Europe. External migration should have a joint European action dimension.

We should let ideological conflicts go because they are widening the gap between member states.

SM: I almost sense a longing for Angela Merkel.

JV: Not longing. But who am I to judge her? I respect a lady like her. But she changed the Christian Democratic Union into a liberal party, and they entered the competition with the real liberals. They should have been much more straightforward on principle.
SM: Do you feel like there is an imbalance in media coverage when it comes to conservative women leaders such as yourself and liberal politicians such as Sanna Marin or Kaja Kallas or Jacinda Ardern?

JV: We conservatives are humble—we don’t have to be extreme on the internet to be okay, we talk to our people and work then go home, cook dinner, kiss our kids, and read a book at night. We don’t need to promote or overexaggerate ourselves. This is the character and nature of conservatism. To safeguard the past and then modernize organically. This is difficult for me, but we as conservatives, we have to take off the gloves and be present in the arena, My objective is to show even those who don’t like me, that at the end of the day they are better off with us.
SM: Where do you see yourself in the next coming, political future?

JV: As long as my children are small, work is an exception and family is the general rule. My focus for the next five or six years is to be a good mother to my little children. This is a one-time opportunity. Life is long, and I can be a politician and a lawyer later. I am serving my country and it’s a great honor. I came back from Brussels because I wanted to dismantle the bad mantra against my country. I just wanted to explain my country’s rationale in various capitals and one thing led to the other.

SM: What would you say to the Anglo-American conservatives?

JV: I keep fingers crossed for them for the 8th of November. We need you. Every step forward for the conservative movement globally also resonates in Europe. This weakens our opponents. We count on you.

0
2022-11-05
sc
Previous: Nuclear Hypocrisy
Next: The European Project Is Now at the Mercy of the Weather
Subscribe
0 Comments
Inline Feedbacks
View all comments