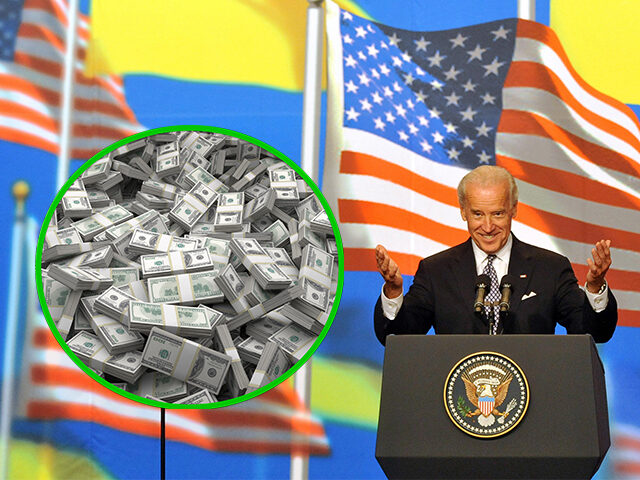 President Joe Biden is considering the move, particularly if Democrats lose their majorities in the House and Senate, the report notes, citing “officials familiar with the discussions.” The number is expected to be around $50 billion.
If House Speaker Nancy Pelosi and Congressional Democrats lose power in the midterm elections, Ukrainian aid would be one of their final priorities before the power switch in January.
The report also notes that Biden “lost his temper” in June during a call with Ukrainian President Volodymyr Zelensky as he kept asking for more money, even as Biden had just announced another $1 billion in aid
Biden raised his voice on the call, telling Zelensky that he should be more grateful for the aid he was receiving.

Republicans and even some Democrats are showing more resistance to the flood of aid dollars and equipment flowing to Ukraine.
House Majority Leader Kevin McCarthy warned in an interview earlier this month that there would be no “blank check” on Ukraine aid if Republicans took power in November.

That triggered Rep. Liz Cheney (R-WY) who reacted by describing McCarthy as “pro-Putin.”
Liberal Democrats also expressed their concerns about the Biden administration’s position on Ukraine as they sent a letter signed by 30 liberals in the House of Representatives before it was retracted by Congressional Progressive Caucus Chair Pramila Jayapal (D-WAMore).

Since Russia invaded Ukraine, Biden has signed $65 billion in aid for Zelensky.

Last week Biden expressed frustration with McCarthy for his remarks about Ukraine aid spending, suggesting that he had put the world in danger.

“These guys don’t get it,” Biden said during a fundraiser in Pennsylvania. “It’s a lot bigger than Ukraine. It’s Eastern Europe. It’s NATO. It’s real serious, serious, consequential outcomes. They have no sense of American foreign policy.”

What is the national debt of the United States now? 40 trillion? and something around 140% GDP. Flag can in hand.