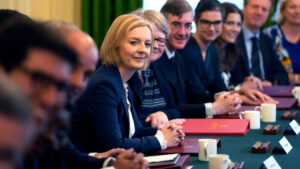 In particular, the government is planning a tax reduction of nearly 50 Billions of Euro's, especially for the wealthy. A gift to the richest that does not pass and causes tremors throughout the country.

50 billion euros less tax, this is the promise made by the government, Friday 23 september, when new Prime Minister Liz Truss unveiled her fiscal policy. The top income tax bracket should disappear for all Britons who earn more than 170 000 euro per year, just like the tax on the most expensive real estate transactions. But alongside these tax cuts, no explanation was given on how to compensate for this lack in public finances.

An announcement that caused a lot of reaction and which goes so far as to worry the International Monetary Fund (FMI). He asks for a “revaluation”, otherwise “inequality is likely to increase”. Already before the weekend, the reactions were felt very quickly. Financial markets, notably, plunged as did the pound sterling. After an initial mechanical reaction from the stock market, it is now the Bank of England which announces that it could raise its interest rates sharply next month. This decision could lead to much more expensive loans for individuals, as for business.

An increase in interest rates to be expected

A prospect that worries many MPs, as Roger Gale, elected by the majority, who was speaking on ITV News : “If it happens, then we might have a storm”, does he think. “I am unfortunately old enough to remember the last financial crash. People came to see me in tears. They were losing their homes, their companies. I don't want to see this again”, advance the elected, worried.

Already, several English banks have decided to limit their loan offers. The Nationwide Building Society has even raised its rates, as a preventive measure. New investments are therefore mechanically hampered by this conjecture.. These announcements have drawn a lot of criticism, and even the anger of some experts. “I have never seen that !”, despairs Davic Blanchflower, economics teacher. “I have been working in the economy for 50 ans. I lived through the Great Recession, and I have never seen such incompetence”, he assures.

After this first storm across the Channel, the Minister of Finance expects further announcements on 23 November.

0
2022-09-30
sc
Previous: The U.S and Europe are running out of weapons to send to Ukraine
Next: Farewell to Sanity
Subscribe
1 Comment
Oldest
Newest Most Voted
Inline Feedbacks
View all comments

Truss with his team “professionals” drive the British to hell. That's where they go. The queen died on the second day, knowing, that Truss is the new prime minister. She had a premonition of what kind of *zdets would come.