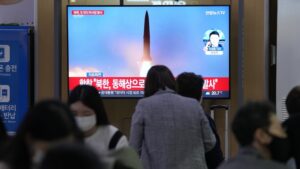 North Korea fired two short-range ballistic missiles toward the East Sea on Wednesday, just one day before U.S. Vice President Kamala Harris arrives in South Korea and amid speculation that North Korea is preparing to conduct its seventh nuclear test as early as October.

South Korean military detected two short-range ballistic missiles fired from the Sunan area in Pyongyang into the East Sea between 6:10 p.m. to 6:20 p.m. local time, according to South Korea’s Joint Chiefs of Staff.

South Korea’s Joint Chiefs of Staff immediately and strongly condemned the missile launch calling it a “grave provocation” that undermines peace and security on the Korean Peninsula as well as the international community. Pyongyang has launched ballistic missiles 18 times and cruise missiles two times so far in 2022.

“North Korea’s act of provocation will intensify the deterrence and response capabilities of the South Korea-U.S. ally and aggravate North Korea’s isolation from the international community,” South Korea’s Joint Chiefs of Staff said in a statement. “It’s a clear violation of the U.N. Security Council resolution and we urge North Korea to stop immediately.”

South Korean lawmakers told reporters that they believe North Korea has prepared an underground nuclear test site and that South Korean officials believe their neighbor to the north will undertake its seventh nuclear test sometime between Oct. 16 and Nov. 7, though these reports have not been confirmed.

“It’s become more plausible that North Korea will conduct a nuclear test as it readied the underground nuclear test tunnel,” Lawmaker Youn Kun-young said after a closed-door briefing with Seoul’s spy agency, the National Intelligence Service. “According to the NIS, there’s a high possibility that if North Korea does, it will happen between the 20th Party Congress of China on October 16 and before the U.S. midterm elections on November 7.”

Youn confirmed that the dates are only a reasonable guess and not confirmation of any specific intelligence.

“North Korea must give due consideration to its allies China and Russia,” Former NIS North Korea analyst Kwak Gil-sup told ABC News. “And dropping a nuclear security issue before the U.S. midterms may work favorably for China and Russia, both currently in political conflict with Washington.”

Another analyst suggested that although North Korea may be fully prepared to conduct a nuclear test, it does not necessarily mean that it will do so any time soon.

“When North Korea passed the new law enshrining its nuclear doctrine this month, it is to say that they have the nuclear weapons. North Korea has already proved its capabilities of successfully building a hydrogen bomb that could fit on the top of an intercontinental ballistic missile during its sixth nuclear test in September 2017,” Park Hwee Rhak, chair of the Nuclear Defense Committee at the Hansun Foundation, told ABC News. “If North Korea conducts yet another nuclear test it would only mean that they have improved the force or developed a smaller warhead, but I don’t see why they would go public with a strategic weapon.”

Both analysts, however, agreed about the unpredictable nature of North Korea.

“When it comes to North Korea, hours of analysis and speculation are always met with a surprise threat,” Park said.

0
2022-09-28
sc
Previous: Can America Isolate Anyone?
Next: The U.S and Europe are running out of weapons to send to Ukraine
Subscribe
1 Comment
Oldest
Newest Most Voted
Inline Feedbacks
View all comments

This is a valid US warning., so they don't go there, where they were not asked. If China chewed snot, when Harris flew to Taiwan, then North Korea launches missiles and conducts nuclear tests. So that it immediately becomes clear to everyone and no more questions and doubts arise.