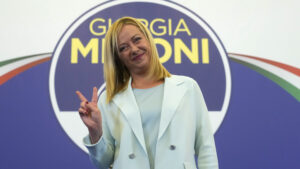 Italy has reportedly elected Giorgia Meloni, the far-right leader of the Brothers of Italy, as its next prime minister, and her political victory is likely to be welcomed by Russian President Vladimir Putin. Meloni leads all exit polls and has already delivered a victory speech.

“Italy chose us,” Melons said, according to the Associated Press. “We will not betray (the country) as we never have.”

On Sunday, Italians voted in their first national election since 2018 and elected Meloni, who was once a Putin admirer, to become the nation’s first female prime minister. The results signaled a turning point for Italy, a nation whose last broad unity government was led by Mario Draghi, an establishment figure who was staunchly opposed to Russia’s invasion of Ukraine.

The Brothers of Italy descended from post-fascist roots, making Meloni the first politician from a post-fascist line to rule the country since World War II. And while she has advocated for sending military aid to Ukraine, she also defended Russia as “part of our European system of values” just last year in her memoir.

“Given the current political climate, this is the best outcome the Kremlin could hope for today,” Eleonora Tafuro, a research fellow at the Italian Institute for International Political Studies, told Newsweek.

Tafuro explained that Russia has long viewed Italy as “one of the friendliest countries amidst an increasingly unfriendly bloc,” largely because of Italy’s desire to play a “mediator” role and to do business with the massive energy provider.

While the friendly relationship was not as apparent under Draghi, Tafuro said that “a Meloni win could mark the return of Italy’s position as a more compromising country vis-a-vis Russia.”

Tafuro said that what makes Meloni so compelling to Putin is that she has presented herself as a defender of “Italian interests,” which have recently suffered thanks to “war fatigue” and the skyrocketing energy prices that have stemmed from Russia’s invasion of Ukraine.

“Putin sees this and considers Meloni the best option in the framework of a bad political relationship with Italy,” she said.

Even as Meloni has taken a more centrist position in condemning the invasion of Ukraine as an effort to appeal to voters, Meloni’s political partners—Silvio Berlusconi and Matteo Salvini—are among those who have been even less aggressive in their criticisms. If the Brothers of Italy party wins a majority in both houses of Parliament with Meloni in charge, it is likely that she will seek an adjustment of the European Union recovery fund program—and use her public support for Ukraine to do so.

Lawrence C. Reardon, a political science professor at the University of New Hampshire, said if Meloni fails to persuade Brussels into reducing Italian economic targets for the year’s end, “Putin and his internet trolls no doubt will attempt to exacerbate the situation in order to divide the EU and its economic sanctions against Russia,” adding that the Kremlin may even consider offering Meloni cheaper barrels of Russian oil this winter.

“A Meloni win would not be a revolution, but obviously Putin would welcome it,” Michael Kimmage, a former member of the U.S. secretary of state’s policy planning staff, told Newsweek.

This chart, provided by Statista, shows the share of seats held by the major right-wing party in the national parliament of selected EU countries.

So, even though the Kremlin won’t be seeking an ally in Meloni, the power play between the greater Brothers of Italy party and the Democratic Party will hand Putin a “right-wing coalition [that] at least offers small racks that the Kremlin could try to exploit,” Tafuro said.

Putin may interpret Meloni’s victory as “the arrival of a hoped-for new age in Europe” where support for Ukraine is weakened, but Kimmage said it is the elections in other European nations that the Russian leader is watching for.

Kimmage said the “big game” for Putin “lies in Germany and the United Kingdom.” It is only if the political winds in these countries begin to shift that Putin might “have something he could really work with, either to drive a wedge between Europe and the United States or to move Ukraine toward a negotiated settlement on Russian terms.”

“But that is a long way from happening,” he added. “And even a Meloni triumph in Italy would not necessarily signal that as goes Italy—so goes Europe. It could still amount to an isolated event rather than a definite trend line.”

0
2022-09-26
sc
Previous: The energy crisis is deliberate
Next: Can America Isolate Anyone?
Subscribe
1 Comment
Oldest
Newest Most Voted
Inline Feedbacks
View all comments

Italians are tired of the passive course of the past government, who brought the country to the brink of an economic crisis. They are tired of following the EU, who cannot decide anything and is waiting for a command from the USA. They brought the right to power, ready to sacrifice relations with Brussels in exchange for an independent, policies that are in the interests of Italy.