Speech by Emmanuel Macron at the UN : the white house telegrapher 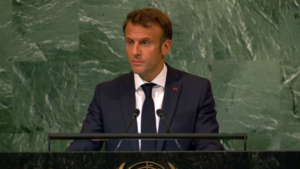 The 14 february 2003, Dominique de Villepin, Minister of Foreign Affairs of Jacques Chirac, gave a speech that has remained famous in the walls of the UN. Back then, the flamboyant minister is desperately trying to avoid the American military outfit in Iraq, based on state lies such as President Saddam Hussein's participation in Al-Qaeda terrorist activities and the "weapons of mass destruction" he allegedly stockpiled.

Hence these words that have since entered history : “In this temple of the United Nations, we are guardians of an ideal, we are guardians of a conscience. The heavy responsibility and the immense honor which are ours must lead us to give priority to disarmament in peace. And it's an old country, France, of an Old Continent like mine, l’Europe, who tells you today, who knew the wars, l’occupation, barbarism. […] True to its values, he wants to act resolutely with all members of the international community. He believes in our ability to build a better world together. »

Once is not custom, Dominique de Villepin was applauded for a long time by a large part of the delegates present ; with the notorious and foreseeable exception of that of the USA.

Today, with the speech of Emmanuel Macron, mainly devoted to the Russian-Ukrainian war, this Tuesday 20 september, we see that if times change, men too. Because it is no longer a question of making the singular voice of France heard but only that of the West ; or the White House, to shorten it. Extracts :

“Russia deliberately violated the United Nations Charter and the principle of equality of States. […] She decided, in doing so, to pave the way for other wars of annexation, in Asia, and Europe, and maybe tomorrow in Africa and Latin America. " To be, we pinch. Because beyond the trial of intent, it is hard to see the Kremlin declaring war on so many countries on so many continents. Unlike the USA and NATO, his armed arm which, them, occupied or militarily struck nations such as Afghanistan, Iraq, Serbia while threatening, during Donald Trump's tenure, to invade Venezuela. But it is true that since its foundation, in 1776, this country has never stopped being at war.

“The universality of our organization is not at the service of any hegemony. This “our” is quite revealing, the UN not being the “thing”, nor of France, nor of North America ; but only a body supposed to represent all the countries of the planet.

The 14 september, Ursula von der Leyen, patron of the European Commission, on the occasion of his talk on the “State of the Union” – another semantico-political borrowing from the Americans -, had already paved the way, echoing Washington's concerns about Beijing's rise. As if the European agenda had become American… Quite logically, Emmanuel Macron was therefore there to perfect a roadmap that was only European in name, scolding those States whose only crime is to show a certain lukewarmness in supporting this war led by the USA against Russia, by Ukrainians interposed.

Thus he asserts : "Who would like to mimic the fight of the non-aligned is mistaken and takes a historical responsibility […] Those who are silent today serve in spite of themselves, or secretly with a certain complicity, the cause of the new imperialism, of a contemporary cynicism that disintegrates our international order without which peace is not possible. " Targeted ? Sub-Saharan Africa, the muslim world, arabic or not, India, indonesia, China, malaysia, and even, we forget ; even if this is half of the international community.

Questioned by Europe 1, ce 19 september, Hubert Vedrine, former Minister of Foreign Affairs of Jacques Chirac, remarked in essence that the role of our diplomacy was to try to resolve conflicts and not to stir them up, and that it had to be admitted that the West was no longer master of the world and that we could not continue to treat the former colonized countries as if they were still colonies. Be a wise and lucid observation. But can these two epithets still be attributed to Emmanuel Macron? ? It is to be believed that not, since behaving at the UN like a vulgar little White House telegraph operator. More than ever, what serves us as king is naked.

0
2022-09-24
sc
Previous: The war in Ukraine has reshaped the world’s fuel markets
Next: The energy crisis is deliberate
Subscribe
2 Comments
Oldest
Newest Most Voted
Inline Feedbacks
View all comments