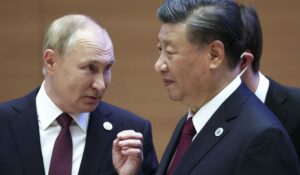 Chinese President Xi Jinping and Russian President Vladimir Putin vowed to forge closer ties during a summit in Central Asia on Thursday that included a discussion of Chinese support for Russia’s troubled invasion of Ukraine and Russian support for Beijing’s claims to Taiwan.

The get-together in Samarkand, Uzbekistan, the first meeting between the two leaders since Mr. Putin ordered the Russian invasion of Ukraine in February, took place on the sidelines of a regional summit.

“China is ready to work with Russia in extending strong support to each other on issues concerning their respective core interests,” Mr. Xi said during the meeting, according to the state-run Xinhua News Agency.
Mr. Xi used the meeting, part of his first trip outside China’s borders since the COVID-19 pandemic erupted in Wuhan in late 2019, to highlight the joint efforts of the authoritarian governments of China and Russia to become leading world powers and challenge what they say is the “unipolar” dominance of the United States.

“In the face of historical changes in the world and times, as major countries, China is willing to work together with Russia to play a leading role and to inject stability into the turbulent world,” Mr. Xi said.