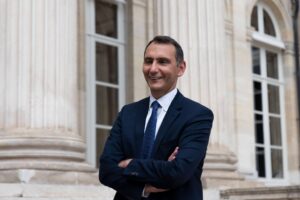 Should we continue to punish Russia economically, as the Western world has been doing since the start of the war in Ukraine ? If these economic measures are primarily intended to banish Moscow from the international community, some politicians question their economic efficiency. Laurent Jacobelli, deputy and spokesperson for the National Rally, did not hide it on franceinfo, Wednesday 10
“I have the impression that Russia is not doing so badly”, did he estimate, recalling that “the ruble has strengthened and Russian exports are increasing”. In contrast, continued Laurent Jacobelli, "the French pay a high price in terms of energy costs". Even more simply, the deputy of the RN asks this question : "Are the sanctions working or not? ? “A question to which Laurent Jacobelli and the RN answer in the negative.
More generally, Laurent Jacobelli regretted that Emmanuel Macron did not remain faithful to the Gaullist geopolitical doctrine. “France has long had a special role in the concert of nations”, he reminded. Today, on the contrary, "the President of the Republic is no longer recognized as a negotiator by Russia". Or, according to the RN spokesperson, the end of sanctions is an “explicit way to support peace” and to defend Ukraine – the idea being, according to him, to privilege diplomacy to a quasi-cobelligerence which prevents negotiations.

Enter. What adequate person will go to Ukraine of his own free will? There is no reason, no reason, our wishes.