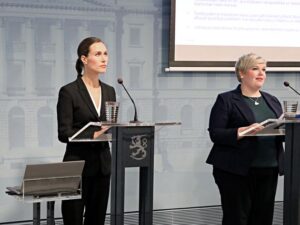 Economists have been outraged by the government's decisions in last week's budget tussle. Economist Sanna Kurronen summed up the feelings on Twitter like this: "This government's hustle and bustle of wasting money is absolutely incomprehensible. Totally unbelievable, pointless waste. If someone still votes for these tuners in the spring, my faith in the victory of reason in Finnish economic policy is over. It's your money, which they sorrowfully share there.”

The state's budget deficit for next year grew in the budget rush 8,1 to a billion euros, when Finance Minister Annika Saarikon (central) the show was still in August 6,3 billion. That was already a big number, although there had been an attempt to make it smaller by moving it 1,9 billion next year's social security expenses to this year's half. This is how it appeared, that the deficit would decrease. But this illusion lasted only for a moment.

All in all, the current government has taken on new debt this election period 40 billion euros. At the end of next year, the debt is estimated 146 billion euros, when, for example, before the financial crisis broke out in 2008 was 54 billion. Such indebtedness has not been seen in Finland since the war years.
In recent years, there was no need to worry too much about getting into debt, when interest rates have been negative and the government's interest expenses have decreased year by year. This year the situation has changed. The interest rate on the Finnish government's ten-year loan has risen by more than two percent in a short time. As a rule of thumb, a one percentage point increase in interest rates means approx 500 an increase of one million euros in interest expenses. In its budget proposal, the government estimates that interest expenses will increase by one billion euros next year – which is now paid by taking on debt after debt.
The government justifies the debt with several consecutive crises. First, the corona crisis hit the economy. After that, Russia invaded Ukraine, which has stifled trade with Russia, accelerated inflation and caused an energy crisis. Prime Minister Sanna Marin (sd) even talks about the "war economy", which seems to be greatly exaggerated. The Finnish economy is nowhere near a war economy, and not even a recession like the 1990s, when banks and companies were collapsing at a rapid pace and unemployment queues were getting longer.
Now the economy is still growing, and employment is at peak readings. The labor shortage has even become an obstacle to growth for companies. Increasing employment would help keep the government's expenditures and revenues in a better balance, but in order to ease the labor shortage, the government did not make any new decisions.

Sanna Marini's government leaves a grim legacy to its successor. The successor has to balance the public finances and look for savings targets at the same time, when economic growth slows down and spending pressures due to population aging increase. I just have to hope, that no new crises come in the way of the next government, sillä puskureita ei julkisessa taloudessa enää ole.

0
2022-09-06
sc
Previous: The prime minister talks about the greater power of the atom and the US-France tandem
Next: Winners and Losers in the Ukraine War
Subscribe
1 Comment
Oldest
Newest Most Voted
Inline Feedbacks
View all comments